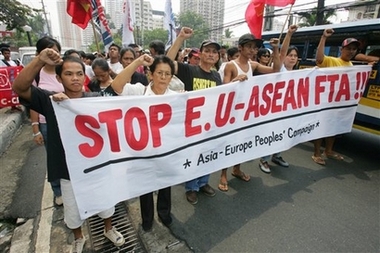 The European Union was planning on a bilateral trade agreement with the Association of South East Asian Nations (ASEAN) for many years. On 4 May 2007, the two sides agreed to start negotiations.

The EU-ASEAN FTA is supposed to be a comprehensive agreement. While ASEAN states are hoping to gain additional market access in the EU, the agreement is expected to have a much bigger impact in strengthening business opportunities for European TNCs in the region.

The talks have moved slowly and it’s not clear if the final deal will take the form of separate agreements between the EU and individual ASEAN members, something the EU seems to prefer. This would allow European governments to avoid taking on any commitments that support the regime in Burma but also to deal with the economic heterogeneity among ASEAN members.

EU procedures require that all ASEAN countries sign a Partnership Cooperation Agreement, containing a commitment to human rights, as a prerequisite to an FTA. Indonesia has already concluded its PCA with the EU, Singapore and Thailand are in advanced stages of negotiations, and Vietnam, Malaysia and Brunei are soon to begin. The Philippine government stated early on that it expects problems in negotiating a PCA, as the agreement apparently requires that the signatory state join the International Criminal Court.

Malaysia, EU seal partnership and cooperation agreement
3-Jan-2023 The Sun Daily
The European Union (EU) and Malaysia signed the EU-Malaysia Partnership and Cooperation Agreement (EU-MY PCA) during the inaugural Asean-EU Commemorative Summit in Brussels on Dec 14, 2022
Indonesia, EU to expedite IEU-CEPA negotiations
21-Dec-2022 Antara News
Indonesia and the European Union (EU) agreed to accelerate the IEU-CEPA negotiations, marked by the successful completion of the substance of financial services arrangements under the services trade framework.
Marcos pushes for PH-EU free trade amid COVID-19 recovery
21-Dec-2022 GMA News Online
President Ferdinand Bongbong Marcos Jr. made a pitch for a free trade agreement between the Philippines and the European Union to shore up economic recovery following the onslaught of the COVID-19 pandemic.
The European Union and Thailand sign Partnership and Cooperation Agreement
19-Dec-2022 Council of the European Union
Thailand is the sixth ASEAN partner to finalise negotiations for a PCA with the EU following Indonesia, Vietnam, the Philippines, Singapore and Malaysia.
DTI: GSP+ renewal on Brussels agenda
9-Dec-2022 Manila Times
The Philippines remains committed to reapplying for Generalized Scheme of Preferences Plus (GSP+) privileges from the European Union once these expire next year, the Trade department said.
Philippines willing to work on FTA negotiations with EU
31-Oct-2022 Philstar Global
The Philippines has expressed interest and willingness to work toward the resumption of negotiations for a Free Trade Agreement (FTA) with the European Union (EU), according to the Department of Trade and Industry (DTI).
EU races to strengthen trade and diplomatic ties with Indonesia
10-Oct-2022 DW
EU-Indonesia relations have soured over a handful of trade disputes, most of which have gone to the World Trade Organization (WTO) for review. Yet tensions are expected to ease once the WTO makes its recommendations by the end of the year.
DTI calls for resumption of PH-EU FTA nego
3-Oct-2022 Manila Bulletin
The Philippines has expressed its readiness to resume negotiations for a bilateral free trade agreement (FTA) with the European Union and the planned visit of President Ferdinand Marcos Jr. to Brussels in December this year could help advance the trade deal negotiation.
EU hopes for trade pact with Indonesia within two years
22-Sep-2022 RFI
The European Union hopes to strike a free-trade agreement with Indonesia within two years despite disputes with Southeast Asia’s largest economy over palm oil and nickel, the bloc’s trade commissioner said.
EU and Thailand cap turbulent decade with a partnership agreement
9-Sep-2022 Bangkok Post
The agreement conclusion may also indicate that both sides are inching closer toward a free trade agreement, which would be the third the EU has struck with a Southeast Asian country.
0 | 10 | 20 | 30 | 40 | 50 | 60 | 70 | 80 | ... | 530