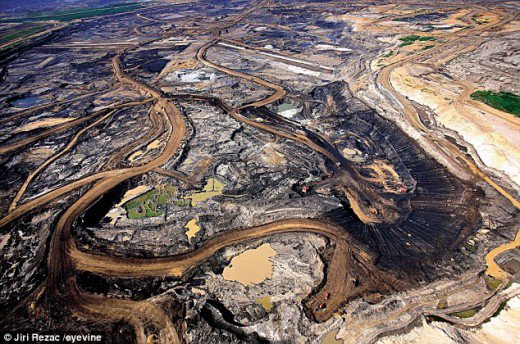 Oil extracted from tar sands is far more polluting than conventional hydrocarbons. But the EU’s decision to change the way it classifies the fuel is good news for Canadian exports and bad news for the environment. EURACTIV’s partner Ouest-France reports.

Tar sands oil is the most polluting of all the fossil fuels. The mixture, deposited at the earth’s surface, is 100 times more viscous and dense than conventional oil. Yet, since December 2014, the energy source, which comes mainly from Alberta in Canada, has no longer been labelled by the European Union as particularly harmful to the environment.

The decision bears the hallmark of the CETA free trade deal between Canada and the EU. Dirty oil has been given a clean label.

It all started in 2009, when EU lawmakers decided to cut transport emissions by 6% by 2020. In 2011, to limit the consumption of oil from tar sands, the European Commission gave the fuel a carbon value five times higher than conventional oil. The EU executive based this decision on Stanford University’s finding that tar sands generate 23% more greenhouse gasses.

“That is when we saw the oil companies really flexing their muscles,” said Patrick Bonin, the head of Greenpeace Canada. The NGO write to Canadian Prime Minister Stephen Harper “to make him stop this lobbying in Brussels”. But it was to no avail. On 17 December 2014, Canada’s dirty oil was “cleansed” in the European directive, which was adopted by the Parliament by 337 votes to 325.

French Socialist MEP and member of the Parliament’s environment committee Guillaume Balas (S&D group), recalled the event as a “democratic obscenity”. “It proves the dysfunction of the EU and its lack of political courage,” he said.

In France, this episode failed to make the front pages, despite the fact that Paris was preparing to host the UN’s biggest ever climate conference, the COP21.

EU Trade Commissioner Cecilia Malmström said just last month that “no European standards have been lowered” during the negotiations on CETA, which still has to be ratified by the EU’s national and regional parliaments.

But for Canadian ecologist Patrick Bonin, this change in labelling was clearly accepted by Brussels as part of the negotiations. “There could be no barriers to trade,” he said.

In 2014, Canada produced 2.5 million barrels of oil per day from tar sands. “This is double what the country consumes,” said the Greenpeace boss. “Most of it is exported.”

It arrives in Europe via the United States, where it is mixed with lighter fuels in the refineries of the Gulf of Mexico.

And the rate of these exports may be about to pick up. US President Donald Trump recently gave the green light to the Keystone XL pipeline, a 1,900 km conduit from Alberta direct to the ports of Texas. “It could carry 800,000 barrels per day,” according to Fabrice Bertoncini, an expert at the French Institute of Petroleum.