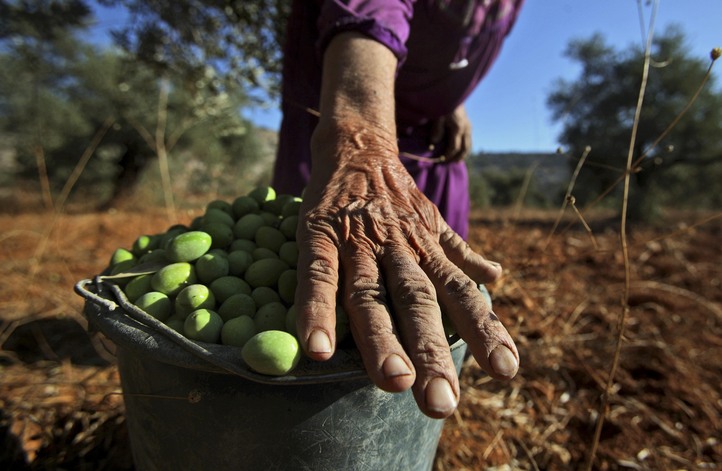 Palestinian farmer Umm Yasser Abu Kharmah, 73, collects olives in a barrel during harvest in the West Bank village of Kufr Ein, on the outskirts of Ramallah. Palestinians began the annual harvest of olives, a staple for many local farmers who also use them to make oil. Muhammed Muheisen-AP

European Union lawmakers approved a plan to give the Palestinian Authority greater access to the EU food market in a bid to bolster the local economy and drive for statehood.

The European Parliament voted to grant direct duty-free and quota-free access to the EU market for farm and fisheries goods from the West Bank and Gaza Strip. Palestinian products have been under the direct control of Israel’s customs authorities, according to the 27-nation EU assembly.

“This agreement offers an opportunity for the Palestinian people — a first step toward the development of a nation,” said Maria Eleni Koppa, a Greek member who steered the measure through the EU assembly today in Strasbourg, France. The deal, to take effect next year, also provides access to Palestinian markets for some European produce.

The United Nations Security Council is due to meet this week to have the admissions committee take up a membership request by the Palestinian Authority, a process that can last days, weeks or months. The U.S. is seeking to delay a showdown while diplomats try to resurrect peace talks that broke down a year ago over construction of Jewish settlements in the West Bank.