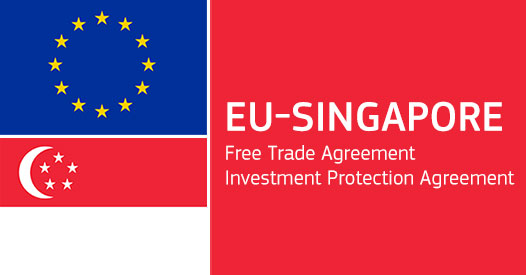 Ahead of Singapore and the European Union signing a landmark free trade pact today, Europe’s top trade official is confident that it will be ratified by the European Parliament and enter into force by early next year.

And European Trade Commissioner Cecilia Malmstrom is looking forward to working with Singapore to ensure small and medium companies, which she described as the backbone of economies on both sides, can take advantage of the benefits the deal offers for better access to each other’s markets.

"This is very much a joint commitment: We want to make sure small companies on both sides get information on the possibilities to use and take advantage of the agreement," she said.

Ms Malmstrom was speaking to Singapore reporters at her office at the European Commission building in Brussels after meeting Singapore’s Minister-in-charge of Trade Relations S. Iswaran.

Mr Iswaran, who is also Minister for Communications and Information, said that while such agreements benefit all companies in general, SMEs "are particularly benefited because it gives them the clarity and the scope to go into other economies".

WIN-WIN FOR BOTH SIDES

This is very much a joint commitment: We want to make sure small companies on both sides get information on the possibilities to use and take advantage of the agreement.

EUROPEAN TRADE COMMISSIONER CECILIA MALMSTROM Both ministers noted that the IPA has to be ratified by each of the 28 EU member states as well, and they discussed how they can work together to make sure it gets approved in an expeditious manner.

"That becomes a powerful way to link them up," Mr Iswaran said, adding that the FTA will give them the regulatory clarity to carry out their business.

Ms Malmstrom noted that the EU has also concluded talks on an FTA with Vietnam, and is in negotiations on one with Indonesia, as it sees these deals as a stepping stone for a wider Asean-EU FTA.

European Trade Commissioner Cecilia Malmstrom is looking forward to working with Singapore to ensure small and medium companies can take advantage of the benefits the deal offers for better access to each other’s markets. Related Story EU trade czar confident of speedy ratification of FTA with Singapore

"That shows our commitment to this very important region," she said.

Asked about Britain’s position in the FTA - the United Kingdom is one of the countries in the EU-Singapore FTA as it is currently an EU member - Ms Malmstrom noted that while the UK is due to leave the EU on March 30 next year, "hopefully and very likely our agreement has entered into force by then".

"And the UK will be part of that."

She noted there are ongoing tense discussions - but no decision yet - on a transition period for the UK after it leaves.

"During that period, it would enjoy all the benefits of our FTA. But once that is over, they would have to leave that agreement and negotiate something on their own," she said.

"But that depends very much on the decisions of the PMs and that is not a done deal yet," she added, referring to the UK’s Mrs Theresa May and her European counterparts on ongoing negotiations over the terms of Brexit.

As for Singapore’s trade links with the UK post-Brexit, Mr Iswaran said: "We have to be guided by the agreements and transition arrangements that have to be made, and Singapore will engage with other countries and the UK on that basis."