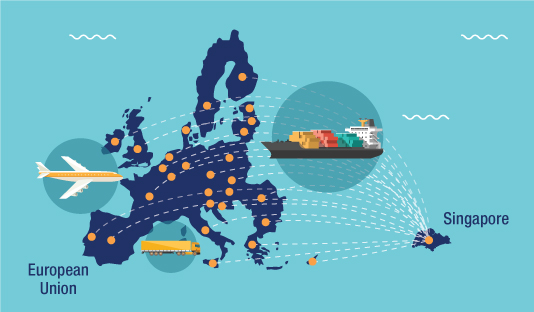 EU-Singapore trade agreement: human rights in the spotlight (may be) by Emanuele Scimia

The free trade pact will test the European bloc’s ability to link trade liberalization to humanitarian issues while trying to enhance ties with ASEAN members. Singapore is a key trading partner for the EU, but its human rights record is troubling.

The EU-Singapore Free Trade Agreement (FTA) entered into force on November 21, removing nearly all customs duties between the two sides. According to the Singaporean leadership, the agreement takes the city state’s economic partnership with the European Union to a higher level. But besides its obvious commercial importance, the FTA is also fraught with humanitarian implications, given Singapore’s troubling human-rights record.

Singapore is the European Union’s largest trading partner in the Southeast Asian region, while the EU grouping is the city state’s third-largest commercial partner. Their total trade in goods stood at €53 billion (US$ 58.7 billion) in 2017, with another €51 billion ($ 56.4 billion) of trade in services. Singapore is also the number one location for EU investment in Asia. During the same year, the bilateral investment stock between the two parties reached €344 billion ($ 380.7 billion).

EU Commissioner for Trade Cecilia Malmström said the agreement included “strong clauses protecting human and labour rights and the environment.” As a rule, and in accordance with the United Nations’ Sustainable Development Goals, the EU links human rights to trade liberalization.

The human rights clause enables the unilateral suspension of the FTA by a party in case of serious breaches by the other signatory country. Under the provision, both Singapore and the EU are committed to human rights as provided for by international law.

Singapore may view it as a form of potential interference in its internal affairs. Human rights groups have repeatedly condemned Singaporean rulers for limiting freedom of expression and assembly, extending detention without trial, restricting the rights of lesbian, gay, bisexual, and transgender (LGBT) people and allowing the exploitation of foreign migrant workers – although the city state’s government denies this.

The EU in June also finalized a FTA with Vietnam, where citizens lack basic political and religious freedoms. Even the agreement with Hanoi includes a human rights clause. The European grouping has pointed out that the commercial deals with Vietnam and Singapore will contribute to the finalization of wider trade and investment accords with the Association of Southeast Asian Nations (ASEAN).

The EU is ASEAN’s largest commercial partner after China, with total two-way trade in goods that was worth €237 billion ($ 262.3 billion) in 2017, and its biggest provider of foreign direct investment, with a stock of €337 billion ($ 373 billion) in the region.

To EU leaders, the advantage of gaining greater access to the vast European common market comes at a price – the acceptation of EU standards on a series of key aspects in commercial relations such as labour rights, social security, environmental protection and legal safeguards.

When the European Commission (the EU executive branch) adopted the final texts of the trade and investment agreements with Vietnam in October 2018, Malmström said that with its action the bloc was helping spread European high standards and create possibilities for in-depth discussions on human rights and the protection of partner countries’ citizens.

The problem is that the EU has so far never activated the clause to suspend trade agreements, drawing the criticism of many human rights defenders. However, it is now considering a temporary suspension of trade preferences for Cambodia over serious and systematic violations of human and labour rights by the Southeast Asian nation’s authorities.