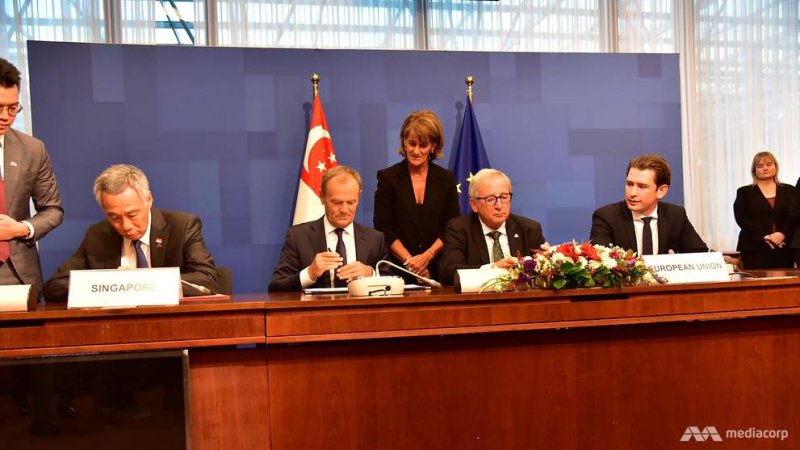 A landmark trade deal between the European Union and Singapore that is set to eliminate almost all Customs duties will likely be ratified and come into force this year, said Minister-in-charge of Trade Relations S. Iswaran.

The EU-Singapore Free Trade Agreement (FTA), which was given the green light by the European Parliament last Wednesday, will be a boost to investor sentiment and confidence, said Mr Iswaran, who is also Minister for Communications and Information.

The pact allows 84 per cent of Singapore exports to enter the EU duty-free once it comes into force. This includes exports of Asian food products and electronics. Individuals and firms will also enjoy better intellectual property protection.

Meanwhile, Singapore will remove remaining tariffs on EU products and commit to retaining current duty-free access for other EU products, as well as reducing red tape such as by recognising the EU’s safety tests for cars and many electronic appliances.

But Mr Iswaran noted that the pact cannot entirely stave off the impact from larger external forces, such as if the United States-China trade talks break down.

"It’s a bit like a counterpoint to, say, something like a Brexit situation. There is uncertainty, you don’t know what is happening," he said. "When trying to make a decision, you will tend to be a bit more conservative, if not a lot more."

Nonetheless, the FTA will allow companies thinking of entering Europe to factor in tariff savings in their decisions, he said.

The FTA has been a long time in the making. Negotiations started a decade ago, and came to fruition on the back of a "sustained and coordinated effort" by Singapore’s representatives, said Mr Iswaran. They hailed from various agencies, including the Attorney-General’s Chambers and the Ministry of Law.

He singled out the efforts of former minister for trade and industry (trade) Lim Hng Kiang, who saw through six ministerial meetings with EU officials. Mr Lim remains at the Ministry of Trade and Industry as its special adviser.

Singapore also received a helping hand from EU officials who advocated for the agreement back in Europe. They include EU Commissioner for Trade Cecilia Malmstrom and European Parliament member Sorin Moisa, who informed Mr Iswaran of the voting results last Wednesday.

EU-Singapore FTA rapporteur David Martin, too, was "extremely helpful... advising us not just about the content but also about what we need to do to shepherd this through to the conclusion that’s achieved now", said Mr Iswaran.

"He was in fact actively still campaigning on our behalf a day or two before the vote," Mr Iswaran added.

In the parliamentary debate on the FTA as well as two other agreements a day before the EU vote, Mr Martin said the FTA sends a message that the EU is committed to a rules-based trading system, adding that "Singapore is a safe harbour for EU trade and investments".

Ms Malmstrom said that the FTA will constitute a benchmark for the EU’s negotiations with other Asean partners.

The two other agreements also received support from the European Parliament last Wednesday.

One is the Investment Protection Agreement (IPA), which will replace 12 existing bilateral investment treaties between Singapore and EU member states, encouraging investments and setting out rules giving investors protection.

The timeline for when the IPA will take effect is more uncertain, said Mr Iswaran, as it needs to be approved by the regional and national Parliaments of EU member states.

The other agreement is the EU-Singapore Partnership and Cooperation Agreement, which provides a framework to deepen cooperation in key areas, such as transport and science and technology.

On why the Government has spared no effort in making the FTA a reality, Mr Iswaran said: "It’s about really trying to create a larger space for Singapore, Singapore enterprises and our people."

He added: "It’s about trying to expand our economic space and also for Singapore to gain some level of mindshare... sometimes you don’t know when and how this will come back and help us, but it does."