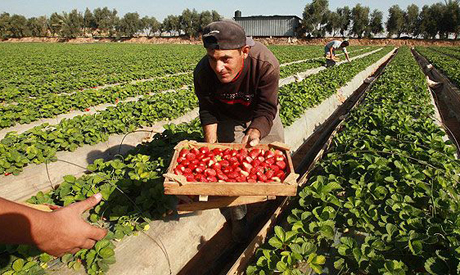 A Palestinian farmer holds a box of freshly harvested strawberries for export on a farm in Beit Lahiya, in the northern Gaza Strip. (Reuters)

The European Union said on Wednesday that it had agreed with the Palestinian Authority to import fruit, vegetables, oils and fish products from Gaza and West Bank duty free for up to 10 years.

The deal affects relatively small volumes of trade. EU imports from Gaza and the West Bank were worth 6.1 million euros ($8.02 million) in 2009 and were mostly early potatoes, oils and seeds such as soya and sunflower seeds, according to EU data.

To protect EU farmers, fruit and vegetables enter the EU at a minimum import price or face duties.

"Further opening to the EU market is expected to support the development of the economy of the West Bank and the Gaza Strip through increased export performance," the EU’s executive Commission, which negotiates trade on behalf of the bloc, said in a statement.

The deal aims to benefit only Palestinian products, the Commission said — a reference to the thorny issue of farm goods from Jewish settlements in the disputed territories, which previously benefitted from EU concessions to Palestine.

"We are aware that the true origin is a potential problem, so we shall be watching that closely," said Commission spokesman Roger Waite.

Wednesday’s deal also forms part of EU plans to open up trade and investment with the Mediterranean rim along North Africa and the Middle East.