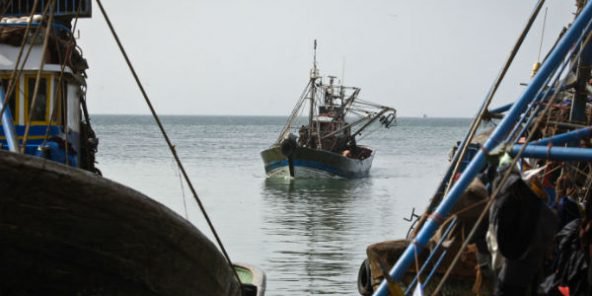 European Parliament has just now voted in favour of the EU-Morocco Fisheries Agreement that will be applied to the waters of occupied Western Sahara.

In the early afternoon of 12 February, the European Parliament gave its consent to a new Sustainable Fisheries Partnership Agreement (SFPA) with Morocco - one that will be carried out primarily outside of the internationally recognised borders of Morocco: in occupied Western Sahara.

The people of Western Sahara have not consented to the deal through their UN-recognised representation, the Polisario Front. Saharawi civil society groups have expressed their opposition to the agreement repeatedly. Last week, 98 Saharawi organisations sent a letter to the Members of the European Parliament (MEPs), asking them to reject the agreement.

In February last year, the EU Court of Justice had ruled the practice of applying the EU’s Fisheries Agreement with Morocco to the waters of Western Sahara to be in violation of international law, in particular of the principle of self-determination.

"The double standard is incredible. One day we observe EU politicians advocate for rule-of-law and democracy in countries like Hungary and Venezuela. The next day, those same politicians openly vote to ignore the rulings of the highest court in the EU. Tell us then, what is the difference? The EU has no right - legally and ethically - to steal the fish from the Saharawi people in partnership with their Moroccan occupiers. We strongly condemn the EU institutions undermining of the ECJ rulings and the UN peace process", Sara Eyckmans, coordinator of Western Sahara Resource Watch stated.

In the last few days, there has been a lot of attention to the plight of the people of Western Sahara. Last week, Freedom House qualified Western Sahara as the world’s most unfree territory in its annual Freedom in the World report. Around the same time, International Crisis Group added Western Sahara to its list of Africa conflict hotspots. Yesterday, leading human rights NGO Human Rights Watch launched a direct appeal to all Members of the European Parliament, requesting them to refer the agreement to the EU Court of Justice over serious concerns about the compatibility with international humanitarian law of applying it to an occupied territory.

In complete disregard of those concerns, and of the EU’s own Court, 415 MEPs voted for the agreement, while 189 opposed and 49 abstained. WSRW will later publish the names of these individuals who supported the illegal agreement covering the waters offshore the occupied territory.

Before the agreement itself was voted on, the Parliament had to vote on a proposal presented by a group of 110 MEPs to refer the agreement to the EU Court for an advisory opinion on its legal framework. That proposal was rejected by 410-189 votes, and 36 abstentions.

There have been five different cases in the Court of Justice of the EU. See the chronology of the cases here.