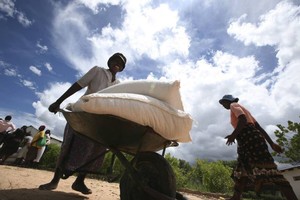 "It’s a victory for the rule of law and it has spared the South African government the embarrassment of being unable to sign the agreement." (Photo: TSVANGIRAYI MUKWAZHI / AP)

South African farmers in Zimbabwe will not forfeit their land or investments as a result of a bilateral agreement still to be signed, a Pretoria judge ordered.

Responding to an urgent application to halt the signing of the promotion and reciprocal protection of investments agreement (Bippa) Judge Roelof du Plessis congratulated both parties for reaching a settlement.

"This is a big step the government [of South Africa] has taken. I believe this order is going to go far in assisting our citizens who have investments in Zimbabwe," he said.

This means that while the order protects investments from the time of the signing of Friday’s agreement, South Africans who have already lost their land to expropriation will have to cite the tribunal finding in claims for compensation.

Lobby group Afriforum who brought the application alongside Zimbabwean farmers said the Bippa was generally understood to have the effect to exclude the enforcement of the SADC tribunal’s orders, and to exempt Zimbabwe from liability for past human rights violations.

They believed it contravened South Africa’s Constitution and international law and had been unable to discuss it with the trade and industry minister.

Speaking outside the court, Afriforum’s legal representative Willie Spies said it was a "huge victory".

"It’s a victory for the rule of law and it has spared the South African government the embarrassment of being unable to sign the agreement. It’s a good day for Zimbabweans."

Spies said, however, it had been unfortunate that the government had been forced to court to hear the plight of its citizens across the border.

"It is actually a pity, unfortunately we only got this settlement after filing papers," he said.

Farmer and applicant in the matter Louis Fick - who faces prosecution for failing to vacate his farm in Zimbabwe - said he was "very relieved".

"We have been trying to get the government involved," Fick said adding that farmers had been battling for nine years.

"I am relieved that our protection has been granted. As we speak, three farmers have been klapped [had their farms taken away). It’s never stopped in Zimbabwe."

When asked if he felt the ruling might aid in his defence against a prison term he said: "I hope so, but I’m not unrealistic about Zimbabwe."

The tribunal referred to took place in November 2008. It said Zimbabwe’s land reform programme "constituted racial discrimination, an infringement of the right of access to courts, and an arbitrary taking without adequate compensation, each in breach of Zimbabwe’s treaty obligations".

Business Unity SA said it would travel to Harare to observe the signing, but would not participate as it had not been consulted, nor seen the terms.

A legal representative for government would not comment on the record.