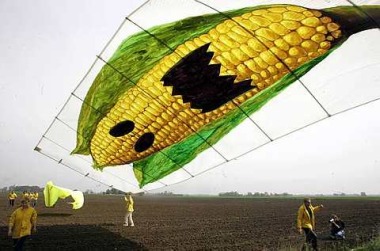 Activists flying a kite displaying a monster-like ear of corn in a field in Seelow, Germany, in protest against the cultivation of genetically modified corn

NINE years after signing the Cartagena Protocol on Biosafety, the country is now about to adopt a regulation that will scrutinise modern biotechnology activities.

The Biosafety Regulations (Approval and Notification) is likely to come into force early next year to facilitate the implementation of the Biosafety Act 2007 enacted by the Natural Resources and Environment Ministry.

Head of the Biosafety Core Team at the ministry, Letchumanan Ramatha, says the draft regulation is in its final consultation stage.

Biosafety regulations are being established in countries that are developing their biotech industry, planting genetically modified (GM) or genetically engineered (GE) crops, and importing GM products either as animal feed, food or for processing.

The Cartagena Protocol on Biosafety was adopted in 2000 by the Convention on Biological Diversity to address the potential adverse effects of biotechnology on the environment.

Malaysia was one of the earliest signatories of the protocol which has since been ratified by 157 nations. Signatories are obliged to implement the protocol by taking measures such as enacting a biosafety law.

Parties to the protocol have met four times since 2004 and are also deliberating on the establishment of an international regime on liability and redress for damages (such as contamination between GE crops and non-GE varieties).

The regulation will compel individuals and institutions that are researching, developing, using, releasing and marketing living modified organisms (LMOs) or more commonly known as genetically modified organisms (GMOs), to obtain a certificate of approval for their activities.

Explaining the working of the impending law, Dr Vilasini Pillai, a genetic engineer from the Malaysian Agricultural Research and Development Institute (Mardi) who is co-ordinating the drafting of the law, says there are essentially two regulatory processes: approval and notification.

“Approval is required for the release and importation of LMOs and products containing LMOs. Releases include those for research and development, placing in the market, gifts, disposal and remediation purposes (for example, soil remediation from toxic spillage).

“Notification is required for contained use (in the laboratory), import for contained use and export of LMOs. It will not impede biotech development in the country. In fact, we’ve relaxed many, many things,” says Dr Vilasini.

She adds that research can proceed once the notification is acknowledged by the National Biosafety Board (NBB) which will then assess the activity and make a decision within 90 days. 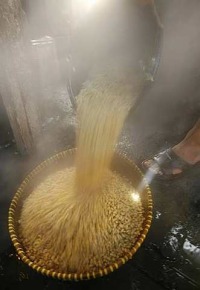 Soya bean to be fermented to make tempeh at a shop in Jakarta, Indonesia. Some 70% of the world’s soya bean crop is said to be from genetically modified variants

Researchers at universities and public institutions like Mardi have raised their concerns that the lengthy approval process (180 days) is not conducive to research that depends on importation of LMOs.

The regulation provides for the formation of the National Biosafety Board, a multi-agency board to be chaired by the secretary-general of the Natural Resources and Environment Ministry.

It will comprise one representative each from the ministries of Agriculture and Agro-based Industry; Health; Plantation Industry and Commodities; Domestic Trade and Consumer Affairs; International Trade and Industry; Science, Technology and Innovation; and four other biosafety experts.

The NBB will in turn appoint members of the Genetic Modification Advisory Committee (GMAC) to advise the board. The existing GMAC, formed in 1996, will be disbanded.

“Appointment is on a personal capacity and not based on organisation,” says Letchumanan, when asked if there would be civil society participation in the advisory body. Third World Network (TWN), a non-governmental organisation that opposes GMOs, is rumoured to have been dropped from the new line-up.

The passage of the Biosafety Act itself was tumultuous, given the controversies surrounding the technology and the business interests at stake.

Supporters of biosafety regulations claimed that the numerous revisions of the draft was a result of the industry’s resistance.

The bill was only tabled in Parliament in November 2006 although it was approved by the Cabinet in January 2004.

At Parliament, reading of the bill was further blocked by those with vested interests.

TWN biosafety expert Lim Li Ching points to the pressure from the US Biotechnology Industry Organisation that called on the US trade representative to reject mandatory labelling in the US-Malaysia Free Trade Agreement (FTA) negotiations in early 2007, claiming that labelling is tantamount to trade barrier.

Although the United States is the biggest GM crops producer, it has not sign the Cartagena Protocol on Biosafety.

Sources familiar with the development of the law say the industry has been stalling progress of the bill, such as raising new concerns even when the text has been finalised.

Noting that the final version of the law has been watered down “to accommodate various interests”, Lim nonetheless reckons that without the law, Malaysians would be worse off “because we won’t have an idea of what’s going on”.

In view of the potential threat on human health, plants, animals, the environment and biodiversity, the law also provides for risk assessment and management, and emergency response plans from researchers and proposers of modern biotechnologies.

The Biosafety Act is available at www.biosafety.nre.gov.my.