Free trade agreement between EFTA and Indonesia concluded in substance 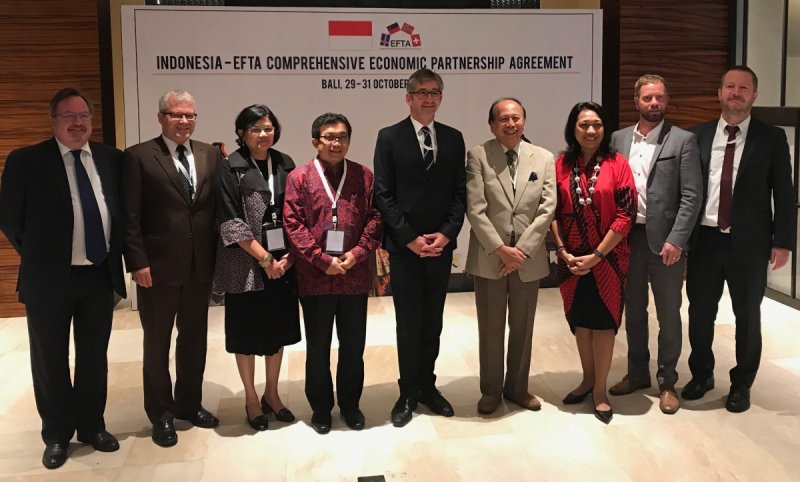 Bern - On 1 November, negotiations on a free trade agreement between EFTA and Indonesia were concluded in substance, with Switzerland acting as lead negotiator. This followed an intensive last round of negotiations and meetings as well as telephone calls between Federal Councillor Johann N. Schneider-Ammann and the president of Indonesia, Joko Widodo, and trade minister Enggartiasto Lukita. The agreement means that 98% of Swiss goods will be exempt from customs duties in the medium term.

Within the next few weeks, the last remaining technical details will be clarified and the texts finalised from a legal perspective. A joint declaration on the conclusion of negotiations is due to be made at the EFTA Ministerial Conference in Geneva on 23 November, and the agreement is expected to be signed before the end of the year.

The conclusion of this agreement is a milestone in Swiss trade policy. As was the case with the free trade agreement with the People’s Republic of China, Switzerland has succeeded in concluding an agreement with a major partner state before the EU. The free trade agreement is of great economic importance for Switzerland: Indonesia is the world’s fourth largest country in terms of population with 260 million inhabitants, and is therefore a major potential market.

Thanks to the agreement, almost all Swiss exports to Indonesia (98%) will be exempt from customs duty in the medium term. All sectors of the economy are therefore set to benefit – from the food industry (cheese, chocolate and coffee) to engineering and watchmaking, chemicals, pharmaceuticals and services, e.g. the financial sector and market access for maintenance staff.

On the important issue of palm oil, the partners agreed on subquotas for palm oil and its derivatives with customs rebates of 20 to 40%, as discussed between the federal government and the relevant branch, so as not to harm domestic oilseed production.

Furthermore, Swiss concerns on safeguarding sustainability were fully taken into account: firstly, the agreement contains provisions pertaining to trade and sustainable development, which are also directly relevant to palm oil production. These include a requirement to comply with and implement multilateral environmental treaties and to respect the basic rights of workers. Furthermore, the agreement contains provisions on promoting the sustainable management of forest resources, in particular by combating illegal logging. Secondly, EFTA has succeeded in securing agreement on a provision specifically on palm oil. That provision contains further reaching obligations to ensure sustainable production and trade in palm oil and other vegetable oils.