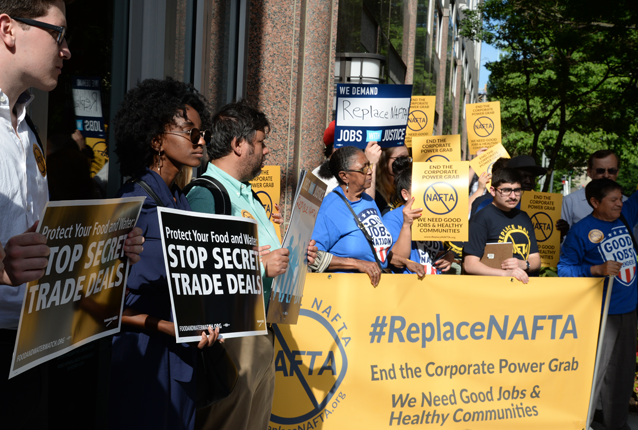 “Free Trade” is today’s imperialism by the 1 percent

Opposition to “free” trade is clearly growing — both the progressive and the corporate elements of the Democratic Party are now critical of agreements like the North American Free Trade Agreement and the Trans-Pacific Partnership. Less clear are the alternatives to free trade that might emerge. As progressives continue to build power inside and outside of the Democratic Party, we must clarify our understanding of the international political economy, and imagine and begin to build real alternatives to free trade. Building these alternatives must become an essential component of a more progressive US foreign policy.

The conventional wisdom says that if you oppose free trade, you must support protectionism or economic nationalism. This is misleading. There is no such thing as “free” trade. People create all of the systems that govern our political economy. These systems inevitably favor certain human activities over others, and we can design them to act any way that we want. The important question is: For whom are trade policies “free”? Put another way: Who do trade policies favor?

“Free” trade is free only for capital owners: the plutocratic few who own and control multinational corporations. When countries enter into free trade agreements, the governments of both countries effectively agree that their laws will not favor businesses from their country over businesses from any other countries. The main way that free trade does this is by attempting to reduce all tariffs to as close to 0 percent as possible, to eliminate import quotas that countries can use to limit the amount and types of goods imported from specified countries, and to discourage countries from more directly subsidizing their own businesses.

Thus, free trade is the modern form that imperialism takes. Throughout US history, the US government has used military force to expand free trade throughout the world. For more than a century, US-backed military coups and US-backed military dictatorships have led to partnerships between the US government, US multinationals and local elites across the globe that are built around creating trade that concentrates wealth for multinationals. This remains a core source of violence in the world with many implications. Today, for instance, Central American refugees at the southern US border are criminalized for fleeing a history of US military coups and intervention in Central America and the neoliberal trade policies that US multinationals and local elites created in their aftermath.

Colonialism and the History of Unequal Trade

In the 1950s, the Argentinian economist Raúl Prebisch and the German economist Hans Singer developed “dependency theory,” which describes the unequal terms of trade that the global North established with the global South during colonialism — the same unequal economic relationships that free trade protects today. Prebisch and Singer attacked the mainstream trade theory of “comparative advantage,” which holds that countries naturally produce the goods that they are most efficient at producing. Core to the idea of comparative advantage — and to mainstream economic theory today — is the idea that the “invisible hand” of the market guides these natural choices.

However, during colonialism, global North colonizers did not rely upon the market’s “invisible hand.” Instead, they ensured — through physical violence and use of tariffs that they still prevent global South countries from using today — that they would have a monopoly on the production of manufactured and high-tech goods, the most profitable sectors of the economy. Global North corporations sold these goods to people in their own countries and to people in global South countries, while making sure that global South corporations lacked the capacity to make such goods on their own.

It is important to note that global North governments have used protectionism to maintain these unequal economic relationships developed during colonialism. For example, the British used tariffs and subsidies to help their corporations become the colonial world’s dominant producer and exporter of textiles and the machines of the early Industrial Revolution, the most profitable manufactured goods of the day. They didn’t stop using protectionism, even while attempting to impose free trade on all other countries, including their American colonies, until they had become the dominant producer of manufactured goods during the 1800s. Similarly, the US relied extensively on tariffs until becoming the dominant producer and exporter of manufactured goods during the early 1900s.

With mass global South resistance to colonialism increasing in the early 1900s and intensifying in the aftermath of the world wars, global North corporations and governments no longer needed colonialism. From their perspective, moving toward the international economic model that would become free trade was much more cost-effective. As the US sociologist Johanna Bockman writes of US government and business elites in the aftermath of the second world war, “[They] supported neither free trade nor globalization imagined as a level playing field with flows moving evenly around the globe. Instead, they supported the international neocolonial system through the [General Agreement on Tariffs and Trade (GATT)], while using the rhetoric of free trade and modernization to support US national interests.”

Roughly 70 years after the global North created the post-second world war international order, global North corporations continue to own and control a disproportionate amount of the most profitable industries in the global economy. Though many US commentators warn of the rise of Brazil, Russia, India and China, US corporations, in 2013, still had leading positions in 18 of the 25 most profitable industries. Moreover, US corporations are dominant in the most profitable advanced industries, including banking and financial services, aerospace and defense, chemicals, computer hardware and software, insurance, pharmaceuticals, heavy machinery, and oil and gas. While the US has roughly 5 percent of the world’s population and 25 percent of the global share of gross domestic product, US corporations likely control far more than 25 percent of the profit-producing capital in the world. These profits are concentrated among the shareholders of multinationals incorporated in the US, which, according to one estimate, are at least 85 percent owned by US citizens. These profits are not being shared with vast majority of people in the world, most of whom do not own any wealth, let alone shares in corporations.

Global North and US multinational dominance of the world economy is not an accident, as global North governments and multinationals have used the international institutions they created following the second world war to continue to dominate the world economy. These institutions include the United Nations; the GATT, which has since become the World Trade Organization (WTO); the International Monetary Fund (IMF); and the World Bank.

As Lawrence Summers, economic adviser to the Clinton and Obama administrations, points out, the GATT/WTO free trade regime has been so successful that today’s free trade agreements aren’t even about the traditional obstacles to free trade, as these obstacles are already effectively eliminated in most countries. Instead, today’s agreements involve protecting the property rights (especially the intellectual property rights) of multinationals and harmonizing the regulatory regimes across countries with which multinationals must comply. In other words, today’s free trade agreements are about enforcing the unequal economic relationships that global North corporations have continued to enjoy since the times of colonialism.

Through the work of GATT/WTO, the IMF and the World Bank, global South governments and corporations have been kept in the unequal economic position developed during colonialism. As Vijay Prashad explains, US and Western militaries have also helped to expand free trade throughout the world by supporting military dictators and military coups throughout Asia, Africa and Latin America. This economic and military violence is the visible hand the global North governments and corporations have used to concentrate the world’s wealth.

This visible hand explains how global North, and especially US, corporations continue to own and control a disproportionate amount of the most profitable industries in the global economy.

Learning From Past Efforts to Reform International Institutions

Before more deeply exploring the alternatives to free trade that we can create today, we should focus on two post-WWII efforts to change the established international political economy order: John Maynard Keynes and E.F. Schumacher’s attempt to create an International Clearing Union (ICU) in the 1940s and the Non-Aligned Movement’s effort to create “structural adjustment” in the 1960s and 1970s.

Second, national governments cannot simply increase their country’s purchasing power through public spending. If national governments spend, creating money in their own currency, their currency depreciates relative to other currencies as the supply of their own currency has increased, making imports even more expensive, further depressing the country’s purchasing power. Keynes and Schumacher were effectively arguing that the rules of the international financial system depressed purchasing power and caused recessions because the rules allowed global North multinationals to concentrate capital that they refused to redistribute. Without redistribution, global South purchasing power remains too low in order to incentivize global North multinationals to invest at high enough levels required to avoid recession.

The solution, according to Keynes and Schumacher, was to create an ICU, which would effectively act as an international bank through which all currency exchanges would occur. The ICU would track global North trade surpluses, and if such surpluses exceeded certain amounts, the ICU would effectively tax the global North currency and redistribute the amount of money taxed to the global South country to increase its purchasing power and to help its country build its own productive capacity. This system, Keynes and Schumacher argued, would recirculate profit throughout the world and keep aggregate demand high enough to avoid the instability of recessions. Today, calls remain for a similar system, with the main difference being that economist Varoufakis prefers that the surplus redistribution be managed by a transparent digital distributed ledger (the technology at the core of Bitcoin and other digital cryptocurrencies), rather than by international bureaucrats.

The key insight from the ICU proposal is that global North multinational corporate concentration of capital creates international economic instability, and that we need an international institution to redistribute global North profits.

Another alternative worth examining is the effort by the Non-Aligned Movement to create “structural adjustment” of the world political economy in the 1960s and 1970s. The Non-Aligned Movement — a group of global South countries claiming independence from the US and the USSR, led by Indonesia, India, Egypt, Tanzania, Yugoslavia, Cuba and others — created the United Nations Conference on Trade and Development (UNCTAD), for which Prebisch, the Argentinian economist who developed dependency theory, was the first secretary-general.

The short answer for why UNCTAD’s efforts failed is because global South countries lacked the required political power; they could not create the program on their own and their unity could not withstand the global recession of the 1970s.

The key insight from UNCTAD’s structural adjustment program is that the current terms for economic competition between global North and global South multinationals are unequal, and deliberate policies for transferring capital, technology and market access to the global South are required to reverse these unequal terms, just as deliberate global North policies were required to create these unequal terms in the first place.

But a key problem with UNCTAD’s structural adjustment plan is that it does not address inequalities of wealth and power within countries. UNCTAD’s program was designed to shift power between the wealthy and powerful in the global North and the global South. It wasn’t necessarily designed to create a democratic political economy throughout the world that shifts power to the grassroots masses and away from the elite few who own multinationals.

We can, however, begin to build alternatives to “free” trade that both shift power and wealth from the global North to global South and from the elite few to the grassroots masses throughout the global North and the global South. Building upon the insights from Keynes and Schumacher’s attempt to create the ICU and the Non-Aligned Movement’s attempt to use UNCTAD to reform the world economy, we can work toward a progressive international political economy that promotes material dignity and freedom for all the people of the world.

source: Truth Out
alternatives US
Subscribe to bilaterals.org weekly