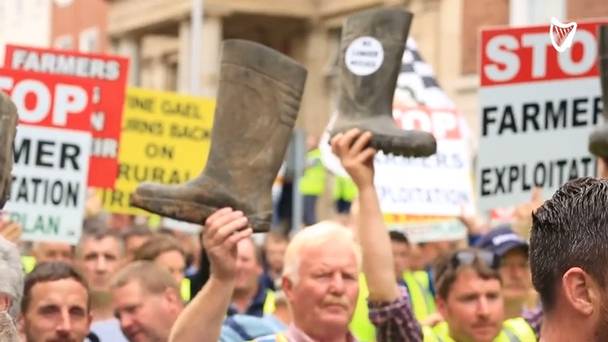 The Government has been soundly defeated on a vote on the Mercosur trade deal in the Dáil.

The vote, on a Sinn Féin motion, was defeated by 84 votes to 46, with Fianna Fáil voting with Sinn Féin and other opposition parties against the Government.

The motion condemned the trade agreement, recently agreed between the EU and four South American countries, as “a bad deal for Ireland and for the planet” and mandated the Government to oppose the deal at the Council of Ministers in the future.

It also demanded that the Government “consider this motion as binding on this and future governments” and said the Government must use “all legal and political means available to frustrate and thwart the deal”.

It also said the Government should “nominate a suitably competent person to defend Ireland’s interests as the next EU Commissioner.”

Current European Commissioner Phil Hogan - who the Government decided this week to nominate for another term - has been criticised for his support for the deal.

On Wednesday, up to 1,000 beef farmers demonstrated against the deal outside Leinster House.

The vote was postponed from Wednesday in line with the practice of holding most Dáil votes on a Thursday.

Although the Government suffered a heavy defeat, it does not regard the vote as binding, and will not affect Government policy, which is to examine the details of the deal before forming a view on whether to oppose it.

Tabling the motion on Wednesday, Sinn Féin TD Brian Stanley said his party “believes the EU-Mercosur trade deal is bad for Ireland, farmers and the environment.

“We want the Government to stand up for Irish interests and reject this disastrous trade deal,” he said.

“We cannot stand over a trade deal which undermines completely Ireland’s climate change targets and the Paris Agreement. We cannot support a deal which requires and facilitates the destruction of the Amazon rainforest. We cannot support a deal that sells out Irish beef farmers and accelerates a race to the bottom in the beef industry on beef quality and workers’ rights,” Mr Stanley said.

A large number of opposition TDs from all parties and independents spoke against the deal.

However, Minister for Enterprise Heather Humphreys said that many TDs were “happy to jump on a bandwagon to score a cheap political point.

“The truth, however, is that some of them would not know a bee from a bull’s foot or the difference between a bull and a bullock,” she said.

Minister for Agriculture Michael Creed, who has also been an opponent of the deal and said the Government would seek to frustrate its intensions, said the motion was meaningless.

“It will not make one iota of a difference legally as to whether a deal, which is not on the table now, ultimately becomes a reality. It is a meaningless vote,” he said.

The Government says that the deal agreed two weeks ago must now be translated into a legal text, after which it will be voted on by the Council of Ministers and the European Parliament. It says it will use that period to influence the final text to protect the Irish beef industry.

However, there is widespread opposition to the deal among the farming organisations and considerable unease among rural Fine Gael TDs.

The Irish Farmer’s Association welcomed the outcome of the vote.

IFA president Joe Healy said it sends a “very strong message” to the Government that Ireland must reject the deal.