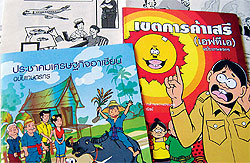 Cartoon books with information about free trade have been circulated to farmers.

Thai authorities are taking precautions to shield businesses and farmers from the fall in farm product prices after tariffs are cut under the Asean Free Trade Area (Afta) at the start of 2010.

Thailand is set to liberalise the market for 23 farm items, although four products - cut flowers, potatoes, coconut meat and coffee beans - have been excluded to protect Thai farmers, said Supaporn Pimonlikit, deputy secretary-general of the Office of Agricultural Economics.

The four items are among 93 on Asean members’ lists of sensitive items, although an open market will be established next year for another 8,300 agricultural and industrial products between Brunei, Indonesia, Malaysia, the Philippines, Singapore and Thailand. New members Burma, Cambodia, Laos and Vietnam will join the agreement in 2015.

"Some limits on imports during harvesting periods of each farm product are being considered. Tight checks on sanitation or any presence of GMOs [genetically modified organisms] will be applied," she said.

In her view, these procedures would be routine and not a form of trade barrier.

The most critical item is rice, which has political significance as it involves more than 20 million farmers.

Despite Thailand’s strong competitiveness in the rice sector, which has made it the world’s leading exporter, imports are a sensitive issue.

As well as implementing measures to buffer the free trade agreement’s impact on farmers, the government must improve farmers’ understanding of the agreement, she said.

Many government agencies have held seminars throughout the country in recent years. The Office of Agricultural Economics has held four seminars this month in the provinces of Sa Kaeo, Nong Khai, Chiang Rai and Krabi to prepare farmers and traders for the changes.

These provinces border neighbouring countries, from which rice and some farm products could flood in, she said.

Many copies of the books have been circulated to farmers nationwide to ensure they are ready for the trade liberalisation, and appreciate the benefits for Thailand. The free trade pact is expected to stimulate consumption and growth in Asean, which has 580 million people, she said.

For sectors likely to suffer from liberalisation, the government has set aside about 200 million baht for an FTA fund to improve the competitiveness of some products.

The Commerce Ministry expects half of the 23 farm products affected by the FTA to see a negative impact from the agreement. They include garlic, onions, rice, tobacco, maize and palm oil.

Farmers in groups or co-operatives have been encouraged to apply for support from the fund, which so far has not been greatly used.