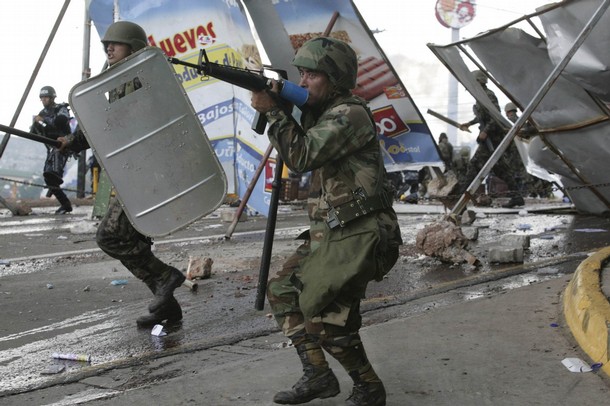 EUOBSERVER / BRUSSELS – The European Commission has condemned a coup in Honduras that saw the country’s president, Manuel Zelaya, forcibly removed from his home in the early hours of Sunday morning (28 June) and flown to Costa Rica by military aeroplane to start a life in exile.

Reacting to the news on Monday, external relations commissioner Benita Ferrero-Waldner urged "all parties involved to resolve their differences peacefully’ and to "promptly engage in a dialogue".

Tensions had been mounting in the Central American country last week as a result of attempts by the left-wing Mr Zelaya to seek a constitutional amendment that would allow him to stand for a second term, something currently not permitted under the country’s constitution.

Following the ousting, the Honduran Congress quickly moved to swear in the leader of a rival faction of Mr Zelaya’s ruling Liberal Party, Roberto Micheletti, as the new president.

Officials from the commission’s external relations directorate general are to meet with Central American ambassadors in Brussels on Monday afternoon and Ms Ferrero-Waldner will be briefed by the Honduran ambassador on Tuesday.

The coup throws a curve ball at EU plans to wrap up an Association Agreement with the six-country Central American bloc this year, whose members included Costa Rica, El Salvador, Guatemala, Honduras, Nicaragua and Panama.

Commission officials had hoped the next round of negotiations scheduled for 7 July could have been the final session needed to secure a deal but this has now been called into question.

"The commission attaches great importance to the finalisation of the negotiations with central America and we still hope we can do this by the end of this year," said the EU executive’s external relations spokeswoman, Christiane Hohmann, on Monday.

However voices from within the EU and a number of Central America countries have now called for the negotiations to be suspended.

The Izquierda Unida (United Left) party said relations with Honduras should be frozen until Ms Zelaya is allowed to return from exile and re-instated as president.

Willy Meyer, a Spanish MEP with party, which sits with the European United Left grouping in the European Parliament, called on Ms Ferrero-Waldner and EU foreign policy chief Javier Solana to exclude Honduras from the Association Agreement negotiations.

"The EU needs to maintain a firm position in this respect and make Honduran inclusion in the Association Agreement conditional on the restoration of the constitutional order," he said in a statement.

A new free trade deal would form a major component of any Association Agreement between the two regions, something a number of environmental and social justice NGOs oppose.

Friends of the Earth campaigner Charly Poppe told EUobserver he has strong "reservations" about the proposed agreement that would pull down a considerable number of trade barriers.

"A lot of sectors will be liberalised that we think should not be liberalised," he said, listing an opening up of public services and stricter enforcement of intellectual property rights as two areas where Central American economies stand to lose from the free trade deal.

Eurochambres, an organisation that represents European chambers of commerce in Brussels, said it was too early to comment on the potential consequences of a suspended deal for European businesses.