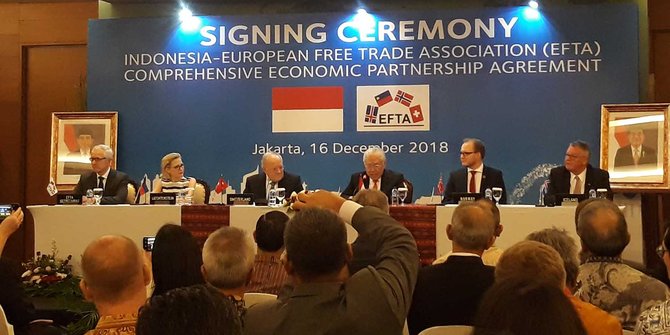 IE-CEPA ratification expected to be completed in 2020: Deputy Minister

Deputy Foreign Minister Abdurrahman Mohammad Fachir has said that Indonesia and the member countries of the European Free Trade Association (EFTA) are in the process of ratifying the Indonesia-EFTA Comprehensive Economic Partnership Agreement (IE-CEPA), expected to be completed next year.

"We need to work hard to make the agreement take effect in 2020," said Fachir at the Indonesia-EFTA Business Forum 2019 at the Grand Hyatt Hotel, Jakarta, on Monday.

After a seven-year negotiation, Indonesia and the four EFTA countries — Switzerland, Iceland, Norway and Liechtenstein — signed the IE-CEPA last December.

Fachir said in the period between 2014 and 2018, Indonesia’s exports to EFTA countries grew 267 percent. In 2018, Indonesia-EFTA trade reached US$2 billion. "There is still plenty of room to make improvements. I believe the IE-CEPA will strengthen our economic partnership," he said.

Fachir expressed hope that through the IE-CEPA, EFTA countries could help more Indonesian products enter the European market. While the ratification process was underway, he suggested that all parties needed to prepare for the implementation of the agreement.

He said the Indonesian business community needed to intensify interaction with their partners in EFTA countries.

"Indonesian entrepreneurs have not tapped into the EFTA markets’ demands yet. They are focusing more on working with traditional markets in European Union countries. So, we need more forums to get involved with each other," he said.

"This agreement is only a [legal] basis. To make it work, it needs help from all parties, especially businesspeople from Indonesia and EFTA countries," she said.

Erwin Bollinger, Switzerland’s head of bilateral economic relations and Federal Council delegate for trade agreements, who attended the event, stressed the importance of the IE-CEPA. "The agreement promotes investment, creates a stable framework and has legal certainty," he added.