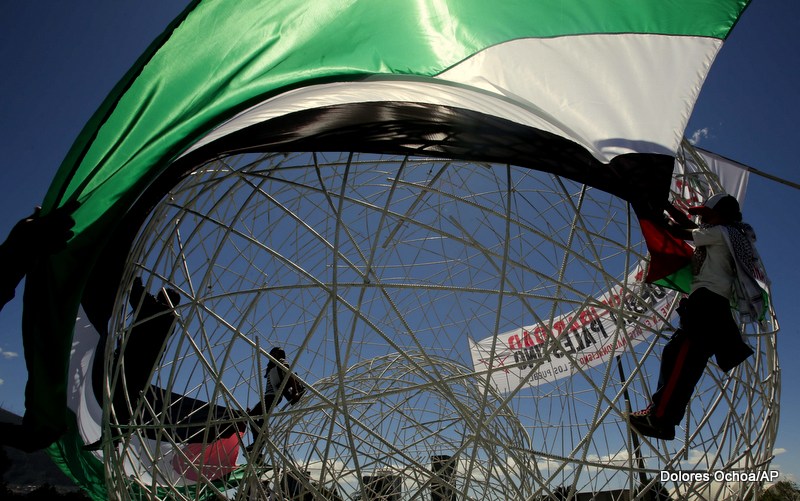 Israel had hoped to weaken its dependency on Europe by making inroads into Latin America, but Operation Protective Edge has thrown a wrench into those plans.

In May, the Jerusalem Post reported on Israel’s intentions to seek stronger economic ties with Latin American countries — with a particular focus on Costa Rica, Colombia, Mexico, Chile and Peru — in an attempt to weaken its dependency on Europe.

“We are making a very concentrated and focused effort to vary our markets, from our previous dependence on the European market, to the growing Asian and Latin American markets, in which Israel needs to take a small market share and bring about growth, employment and social welfare in the State of Israel,” Israeli Prime Minister Benjamin Netanyahu declared at a weekly cabinet meeting.

These efforts were apparently paying off as early as February, when Israel was admitted as an observer nation to the Pacific Alliance, a South American trade alliance composed of Peru, Mexico, Chile, and Colombia. In June, prior to the commencement of the ongoing Operation Protective Edge, Colombia signed free trade agreements with Israel, among other countries.

But upon witnessing the tragedies unleashed by Operation Protective Edge, Latin American countries are now moving to sever diplomatic ties with the settler-colonial state — as some have done in the past — and Chile has already suspended its existing free trade agreements.

“We are declaring Israel a terrorist state”

The late Venezuelan leader Hugo Chavez seems to have triggered a stronger stance in favor of Palestinian rights in Latin America, with various leaders severing ties with Israel or enforcing other detrimental measures.

In 2006, Chavez delivered a strong speech to the United Nations Assembly denouncing U.S. imperialism and Israeli aggression within a Latin American and international context. Regarding Israel’s colonial violence, Chavez stated, “This is imperialist, fascist, assassin, genocidal, the empire and Israel firing on the people of Palestine and Lebanon.”

Speaking about Operation Cast Lead in 2009, Chavez accused Israel of genocide against Palestinians. “The question is not whether the Israelis want to exterminate the Palestinians. They’re doing it openly,” he told the French magazine Le Figaro.

Operation Pillar of Defense in 2012 elicited more strong statements from Chavez. “Another aggression against the Gaza Strip has begun. Savage, savage: the State of Israel bombing the Gaza Strip again.”

The atrocities inflicted by Israel during Operation Protective Edge — an ongoing mission that has left nearly 2,000 Palestinian civilians dead so far — have unleashed a stronger reaction still. Now, however, that reaction is more widespread, going beyond what is usually expected from Venezuela and Bolivia, which severed diplomatic relations with Israel in the past.

Like his predecessor, Venezuelan President Nicolás Maduro has insisted on describing Israel’s aggression as an extermination program against the Palestinian population.

In addition, Maduro has declared the intention of the Bolivarian Alliance for the People of Our America (ALBA) to establish orphanages to shelter Palestinian children whose parents have been killed in Israeli attacks. The shelters, to be named after Venezuela’s late President Chavez, are to be established in each ALBA country — Venezuela, Cuba, Bolivia, Saint Vincent and the Grenadines, Nicaragua, Antigua and Barbuda, Ecuador, Saint Lucia and Dominica.

According to Cubadebate, Venezuela will also be sending medical aid to hospitals in Gaza.

Meanwhile, Bolivian President Evo Morales, who had previously called for Israel’s indictment at the International Criminal Court, has cancelled a decades old agreement that allowed Israelis to travel to Bolivia without visas, saying, “in other words, we are declaring Israel a terrorist state.”

Brazil, Chile, Ecuador, El Salvador, Peru, and Cuba have also adopted firm positions with regard to diplomatic and economic relations, splintering Israel’s previous ambitions of rendering Latin America complicit in its colonial schemes. Of course, how long such stances last and how steadfast they remain will define the extent of Israel’s isolation from Latin America.

Ecuador, as well as Brazil, Chile, El Salvador and Peru, have all recalled their diplomatic envoys to Israel — a move that has angered Israel and generated even more pretentious rhetoric. According to a news report on Haaretz, Israel’s Foreign Ministry spokesman Yigal Palmor declared the diplomatic move “hasty” and a step that “constitutes encouragement for Hamas, a group recognized as a terror organization by many countries around the world.”

Cuba, meanwhile, remains a constant reference in the anti-colonial and anti-imperialist struggle, with the best manifestation of Cuban solidarity being Che Guevara’s visit to Gaza on June 18, 1959 following the triumph of the Cuban revolution. It has maintained its historical stance within an international context. In 1973, Cuba severed diplomatic relations with Israel and has refused to acknowledge Israel’s right to exist ever since — a reflection of the island’s own opposition to colonial domination by the U.S., which Fidel Castro effectively stopped. The Cuban Foreign Ministry released a statement which was published in the Cuban state newspaper, Granma, last week, insisting upon international accountability, an end to the massacres in Gaza, and the restoration of basic services “to preserve the lives of hundreds of thousands of innocent civilians.”

Given its penchant for supremacy, these Latin American reactions to Operation Protective Edge have infuriated Israel, which is now regurgitating the usual “terror” discourse in an attempt to win back sympathy for its massacre mission. As always, misrepresenting and manipulating facts is taking precedence in Israeli rhetoric, with the expectation that the entire world will designate Hamas a “terror organization.”

Contrary to what Palmor stated, the diplomatic repercussions befalling Israel are not “a prize” to Hamas, but a collective recognition of the necessity of making Palestinian resistance, self-determination, and land reclamation a reality.

Support for Israel and fluctuating stands

Some countries such as Guatemala, however, remain faithfully committed to supporting Israel’s illegal existence, as they have since the creation of the settler-colonial state.

Other countries have recently shown fluctuations in their support for or opposition to Israel. For example, in May, a video circulated widely on Twitter depicted Ecuadorian President Rafael Correa spouting words of praise for Israel. Ostensibly meant to seek opportunities for scientific cooperation, Correa’s visit to Israel, scheduled for October, is generating harsh criticism in Ecuador.

Argentina, meanwhile, has called for a ceasefire, but not taken a definitive stand either way. President Cristina Fernandez declared at a summit in Caracas last week that Palestine has the “right to exist,” while also affirming Israel’s fabricated right to “live in peace within its borders.”

In the long run

As briefly mentioned earlier, for the current suspension of diplomatic relations to be effective, they will need to be permanently implemented. But of the countries that have recently severed diplomatic ties with Israel, most rely on the settler-colonial state for unmanned aerial vehicles — also known as UAVs or drones — which those countries use to perfect government oppression against opposition or indigenous populations in their territories.

In Chile, for example, drone technology has been used for surveillance purposes against the Mapuche population, who are also heavily targeted by anti-terror legislation dating back to Augusto Pinochet’s dictatorship. This trend, meanwhile, has escalated since President Michelle Bachelet’s first term in office.

The South American drone market has effectively been cornered by Israel, resulting in automatic complicity against Palestinians.

Should Latin America remain focused upon its intent to isolate Israel through diplomatic measures, it would constitute a major step forward in asserting the illegitimacy of Israel’s settler-colonial conjecture.

Such a stance must also be considered within an internationalist context, a regional anti-imperialist stance reflecting growing dissent against the impunity bequeathed to Israel by its allies. Ultimately, however, the issue rests on the dynamics of dependency and political expression within the region — a right-wing manifestation or center-left policies that pander to imperialism could prove detrimental to a stance that has, so far, given Israel serious cause for concern.

The views expressed in this article are the author’s own and do not necessarily reflect Mint Press News editorial policy.