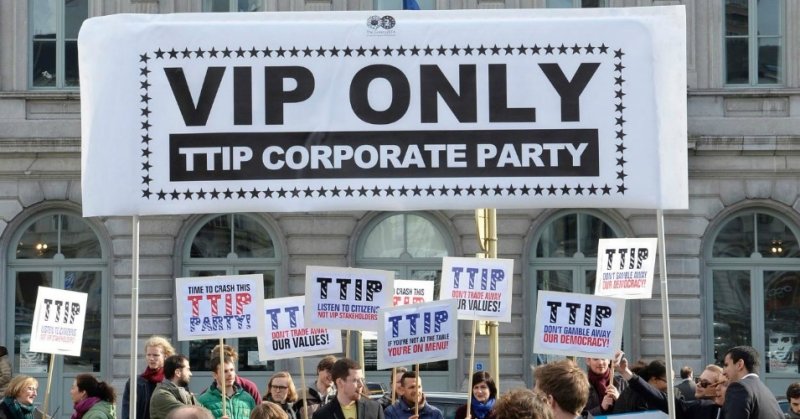 Talks for a free trade deal between Europe and the US face a serious impasse with “irreconcilable” differences in some areas, according to leaked negotiating texts.

The two sides are also at odds over US demands that would require the EU to break promises it has made on environmental protection.

President Obama said last week he was confident a deal could be reached. But the leaked negotiating drafts and internal positions, which were obtained by Greenpeace and seen by the Guardian, paint a very different picture.

“Discussions on cosmetics remain very difficult and the scope of common objectives fairly limited,” says one internal note by EU trade negotiators. Because of a European ban on animal testing, “the EU and US approaches remain irreconcilable and EU market access problems will therefore remain,” the note says.

Talks on engineering were also “characterised by continuous reluctance on the part of the US to engage in this sector,” the confidential briefing says.

These problems are not mentioned in a separate report on the state of the talks, also leaked, which the European commission has prepared for scrutiny by the European parliament.

These outline the positions exchanged between EU and US negotiators between the 12th and the 13th round of TTIP talks, which took place in New York last week.

The public document offers a robust defence of the EU’s right to regulate and create a court-like system for disputes, unlike the internal note, which does not mention them.

Jorgo Riss, the director of Greenpeace EU, said : “These leaked documents give us an unparalleled look at the scope of US demands to lower or circumvent EU protections for environment and public health as part of TTIP. The EU position is very bad, and the US position is terrible. The prospect of a TTIP compromising within that range is an awful one. The way is being cleared for a race to the bottom in environmental, consumer protection and public health standards.”

US proposals include an obligation on the EU to inform its industries of any planned regulations in advance, and to allow them the same input into EU regulatory processes as European firms.

American firms could influence the content of EU laws at several points along the regulatory line, including through a plethora of proposed technical working groups and committees.

“Before the EU could even pass a regulation, it would have to go through a gruelling impact assessment process in which the bloc would have to show interested US parties that no voluntary measures, or less exacting regulatory ones, were possible,” Riss said.

The US is also proposing new articles on “science and risk” to give firms greater regulatory say. Disputes over pesticides residues and food safety would be dealt with by the UN Food and Agriculture Organisation’s Codex Alimentarius system.

Environmentalists say the body has loose rules on corporate influence, allowing employees of companies such as BASF, Nestle and Coca Cola to sit on – and sometimes lead – national delegations. Some 44% of its decisions on pesticides residues have been less stringent than EU ones, with 40% of rough equivalence and 16% being more demanding, according to Greenpeace.

GM foods could also find a widening window into Europe, with the US pushing for a working group to adopt a “low level presence initiative”. This would allow the import of cargo containing traces of unauthorised GM strains. The EU currently blocks these because of food safety and cross-pollination concerns.

The EU has not yet accepted the US demands, but they are uncontested in the negotiators’ note, and no counter-proposals have been made in these areas.

In January, the EU trade commissioner Cecilia Malmström said [pdf] the precautionary principle, obliging regulatory caution where there is scientific doubt, was a core and non-negotiable EU principle. She said : “We will defend the precautionary approach to regulation in Europe, in TTIP and in all our other agreements.” But the principle is not mentioned in the 248 pages of TTIP negotiating texts.

But the new leak will not placate critics of the deal, who have pointed to attempts by fossil fuel firms and others to influence its outcome, as a sign of things to come.

The EU negotiators internal note says “the US expressed that it would have to consult with its chemical industry on how to position itself” on issues of market access for non-agricultural goods.

Where industry lobbying in regulatory processes is concerned, the US also “insisted” that the EU be “required” to involve US experts in its development of electrotechnical standards.