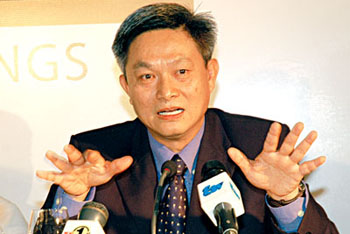 Malaysia can still walk away from TPPA, says analyst

KUALA LUMPUR: Malaysia is still able to walk out from the contentious Trans-Pacific Partnership (TPP) agreement, said an economist .

However, RAM Holdings group chief economist Dr Yeah Kim Leng added that this would take away the country’s advantage of being a “first mover” and founding member in the TPP.

“Malaysia can withdraw voluntarily; we are free to walk out. But you will lose the first mover advantage,” said Yeah.

He said this meant that the country would not be able to influence the terms and agreements of the TPP agreement to be at an advantage or at least “win-win”.

Asked if such a situation is possible, Yeah said that it was unlikely to happen given that the 12 members had committed to have all the members or none at all.

“Because they have this commitment to have all or none, it is not that they can kick out Malaysia,” said Yeah.

Previously, US President Barack Obama has said he wants to reach an accord by the end of this year on the free trade area, which would account for more than 40 percent of the global economy.

Yeah said that given Prime Minister Datuk Seri Najib Tun Razak’s statement, as well as other members who might not fully agree to more aggressive terms in the TPP agreement, he predicted that the year-end dateline is unlikely to be met.

“I think that there are a number of areas that Malaysia has its reservations, particularly in the area of Bumiputera quota and government procurement, and perhaps Intellectual property rights. The protection for patent for drugs and medicine,” he said.

“Those are a couple of sticky areas that Malaysia may have reservations, and those are where Malaysia wants special consideration. I think there that could hold the timing of the conclusion for Malaysia.” Yeah said that by and large, the TPP agreement would benefit Malaysia’s economics.

“The benefits are long term in nature, what the TPP agreement does is further look into facilitation that would reduce trade barriers. This would enhance investor confidence and open up government contracts in each other countries,” he said.

While he said a ‘level’ playing field, which may not be fair to smaller countries, each country would have to design the agreement to fit each countries’ abilities.

Yeah said another significant point from the concluded APEC summit was that the leaders from those countries have reaffirmed their commitment to cater to economic cooperation.

“In particular, they will not resort to protectionalism. That means that Malaysia can still pursue without affecting the other non-TPPA members,” he said.

TPPA, a proposed free trade agreement under negotiation by 13 countries including Malaysia, is said to be a “gold standard” agreement specifically aimed at emerging trade issues in the 21st Century.

However, there has been resistance from various members within the group of 12 nations to many provisions within the TPPA, and analysts believe a deal matching US ambitions by the end of this year is impossible.

China, which has not been invited to join TPPA talks, is pursuing a rival free trade deal involving 16 Asia-Pacific countries.