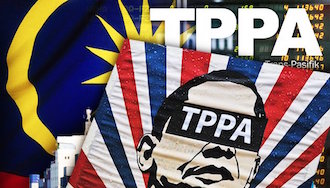 Malaysia, only country with opt-out clause in TPPA

Malaysia is the only country to be granted an opt-out clause in a side letter to the Trans-Pacific Partnership Agreement (TPPA), Asian Development Bank Lead Economist, Jayant Menon said.

"This actually allows Malaysia to withdraw from the TPPA without even trying to rectify it in Parliament. No other member country can do that.

"How Malaysia was able to secure this, I don’t know. But, I think International Trade and Industry Minister Datuk Seri Mustapa Mohamed is a great negotiator," he added, at the ASEAN Economic Forum here today.

He said the TPPA was labeled a gold standard agreement, but now that the negotiated text is available, it is significantly watered down to secure compromises.

"Malaysia has been perhaps the most successful in securing exemptions in many sensitive areas, including things like government procurement, reform of state enterprises or government-linked companies and protection in certain areas of intellectual property reforms.

"With so many exemptions, probably it is not a big deal for Malaysia to go through with the TPP after all," he said.

However, Jayant also opined that the TPP itself may not become a reality if it doesn’t get through the US congress.

"There is no guarantee that it will. The Republicans have to be supported in large numbers as the Democrats are already opposed to it.

"Politics is playing a bigger role now. There is no guarantee that the TPPA will simply pass through Congress. We just to have to wait and see," he said.

Jayant was speaking as a panel member at the forum on the evolving regional trade architecture and market reaction towards it.

On the ASEAN Economic Community (AEC), he concurred with the KL Declaration that said it is not a destination but rather a journey, and that the fair expectations for the completion of its implementation should be in 2025.

He said based on recent studies, more activities and awareness programmes for the AEC are needed to raise its profile.

On the AEC’s fourth pillar of integration into the global economy, Jayant said it was an area that ASEAN has been particularly successful at.

"ASEAN has been able to use regionalism to actually promote globalisation.

"ASEAN kept open its door open. Trade within ASEAN continues to grow and it will grow even more with the AEC," he added.