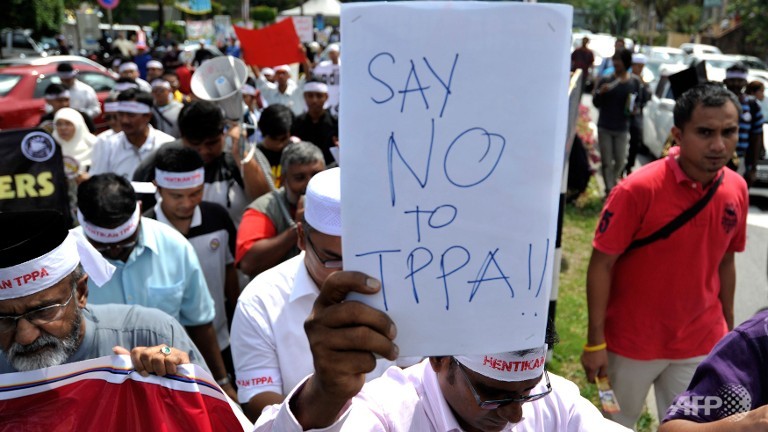 Malaysia should withdraw from the Trans-Pacific Partnership (TPP) now, said a Malay economic group, warning that the contentious trade deal will result in negative economic growth and have implications on the country’s sovereignty.

Malay Economic Action Council (MTEM) CEO Mohd Nizam Mahshar said there have already been warnings from experts including Nobel laureate economist Joseph Stiglitz, on the pervasive effect of the trade deal on Malaysia’s many industries.

One consequence of the agreement, Nizam said, would be Malaysia’s inability to protect itself from international currency speculators, who have been blamed for the 1997/1998 Asian financial crisis that caused the country to impose capital controls including a ringgit peg.

"We feel the government should not conclude the negotiations in Atlanta, they should withdraw themselves because studies by various quarters including by Stiglitz clearly states TPP does not benefit the country," he said at a press conference today.

Malaysia is currently in the final stages of ministerial-level negotiations in Atlanta, United States.

MTEM was responding to an article by former World Bank chief economist Stiglitz and Roosevelt Institute senior economist Adam Hersh who wrote that the TPP would make Malaysia "worse off", predicting that industries like iron and steel, aluminium, mineral fuels, plastics, and rubber would be among the sectors in jeopardy.

Stiglitz and Hersh said the TPP was a "backhanded way" of undermining countries’ ability to protect the health and safety of their citizens, the environment, or even the economy.

They reported that economists at the United Nations Conference on Trade and Development, UNCTAD, had forecasted that Malaysia would actually be a net trade loser as a result of joining the agreement, with its trade balance – the difference between the value Malaysia produces for export and the value it imports – declining by US$17 billion (RM75 billion) per year as a result of the agreement.

Nizam also disputed the International Trade and Industry ministry’s (Miti) assessment that the trade deal would not have any impact on the country’s constitution as well as on federal and state laws.

"There have been no studies to prove that. We have been asking for the last three years which area and which industry will benefit," he said.

MTEM has raised its concerns with Miti, Nizam said, only to be met with unfavourable responses which he described as a "one way street".

"We do not know what’s Malaysia position is on various issues under TPP. To date, we have no official feedback on the issues we have raised, other than our concerns have been ’listened to’," he said.

He said Malaysians negotiators at the TPP discussion should be firm and ensure that crucial sectors like medicine, government-linked companies and special rights for Bumiputera will not be affected under the agreement.

Negotiation over the TPP has been ongoing for the last five years, and is expected to take effect by 2018.

More than 100 sessions have been held over the last few years by Miti on the agreement that covers 12 countries – Australia, Brunei, Canada, Chile, Japan, Malaysia, Mexico, New Zealand, Peru, Singapore, the US and Vietnam – a market of 800 million people with a combined gross domestic product worth US$27.5 trillion.