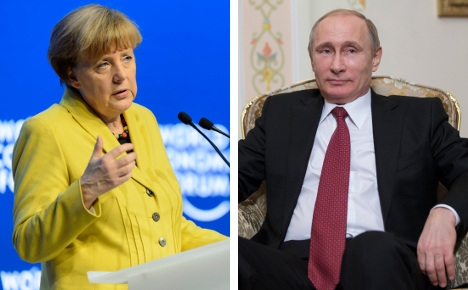 Germany would be prepared to negotiate a free-trade agreement between the European Union and Russia as a way out of the deadlocked Ukraine conflict, Chancellor Angela Merkel said on Thursday.

Merkel told the World Economic Forum in Davos that Germany was "ready" to open talks about "possibilities for co-operating in a collective trade area", the Süddeutsche Zeitung reported.

But she said that a pre-condition for the plan, suggested by Russian President Vladimir Putin several years ago but ignored by European leaders, would be a comprehensive peace agreement in Ukraine.

Economy Minister and Vice-Chancellor Sigmar Gabriel added that EU members should already be discussing what they could offer Russia in the event of peace.

"The next step is a free-trade zone", he told the Davos summit.

"We need to offer Russia a way out".

Both Merkel and Gabriel followed Putin by evoking the idea of a free-trade zone stretching "from Lisbon to Vladivostok", a phrase first used by Putin in 2010.

But both agreed that the free-trade zone could only be a long-term objective until Russia fulfilled its half of the September Minsk accords, in which Kiev, Moscow and Ukrainian pro-Russian separatists agreed a ceasefire which has so far failed to hold.

Merkel renewed her condemnation of Russia’s annexing of the Crimea, saying that they had made economic sanctions against Russia unavoidable.

"Unfortunately we’re not yet there" at the point when sanctions could be removed, she said.