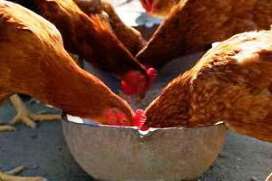 The free trade agreements made by the Mexican government may have many advantages for large Mexican companies but have also created problems for hundreds of poultry farmers in the country.

According to the former president of Mexico’s National Union of Poultry Farmers (UNA), Jaime Crivelli Espinoza, in the last 20 years over 100 poultry companies have disappeared, creating a monopoly of large Mexican poultry companies. This is due to the government’s support of free trade agreements that have allowed increased chicken imports.

Crivelli told a Mexican newspaper that some of the measures have affected poultry farmers, whereby they had to lower the price to the consumer in order to compete with the excessive competition of transnational corporations.

From the annual production, approximately 12% is imported from the United States, Chile and Brazil.

"The government is opening the borders to countries that have nothing to do with Mexico, and they have a free pass to trade; no corruption of the authorities, but they are not interested in domestic producers," said past president of the UNA.

The poultry farmers told the government opening the borders when the price of chicken is increasing causes the collapse of the price of the Mexican producer.

Another impediment is that the Federal Competition Commission expects that producers to reach an agreement on the price to the public when the price of chicken increases, which proves the monopolistic practice, helping to grow larger companies marks the end of smaller ones.

This has caused the poultry sector to become a business for very large companies and transnational, because now Brazilians are like second chicken production.

Crivelli indicated that the effort made over the last 20 years to clean the poultry industry of infectious diseases has brought results, and the state has become attractive for investment from other companies in the country and abroad.

One example is that 20 years ago, in the state of Veracruz there were 80 poultry producers, with 6 million chickens; currently there are more than 30 million chickens are produced, but only seven producers. Veracruz contributes 11% of the domestic production of chickens.