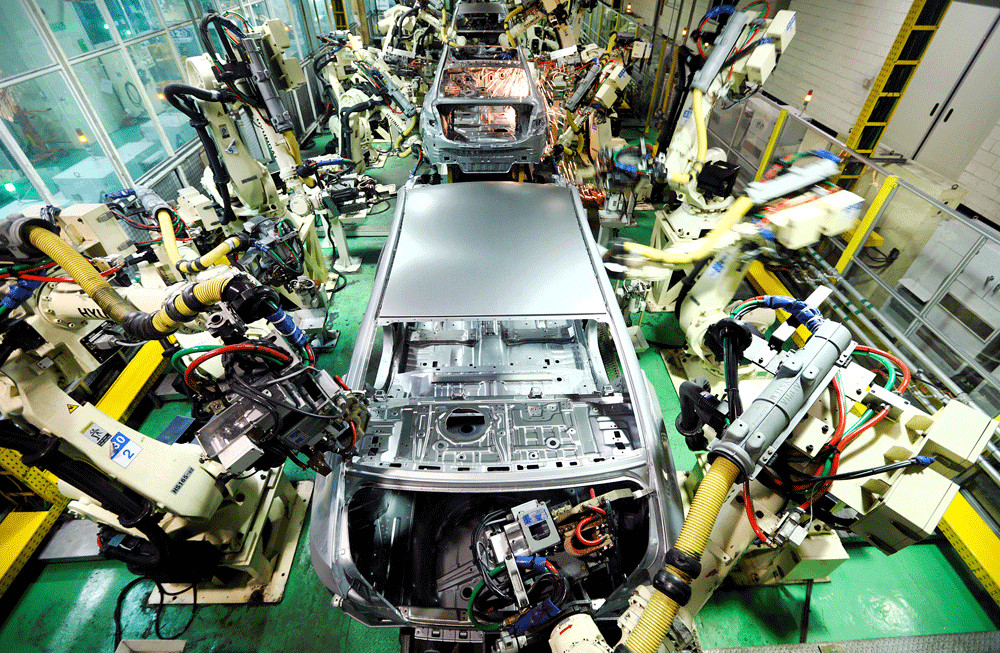 Hyundai Motor sedans are assembled at a factory of the carmaker in Asan, about 100 kilometers south of Seoul.

In September this year, India and South Korea resumed renegotiation of their landmark Comprehensive Economic Partnership Agreement (CEPA) that played a key role in spurring trade between the two sides and boosted bilateral ties.

India’s engagement with South Korea has been largely low key, especially compared to New Delhi’s vibrant ties with countries like Japan and the U.S. The synergy between Indian Prime Minister Narendra Modi’s "Act East Policy" (AEP) and South Korean President Moon Jae-in’s "New Southern Policy" (NSP), while great on paper, is yet to reach a truly remarkable juncture. Now, with COVID-19 reshaping regional dynamics, there is significant room for both states to accelerate cooperation and build deeper bilateral synergy ― and one way to do this is by refocusing on economic opportunities.

One such opportunity for India-Republic of Korea (ROK) ties comes from Moon’s "New Deal," which was introduced to address the plummeting South Korean economy. Although South Korea was lauded for its successful fight against COVID-19 (under its unique "K-quarantine" model), its economy contracted by 2.9 percent ― the worst recession since the 1998 Asian Financial Crisis. The New Deal is Moon’s attempt to reboot the Korean economy and restore its leading status while "resolving inequality" and trying to bring necessary change to people’s social life.

With investments worth over $130 billion, the "New Deal" broadly consists of two models: the "Green New Deal," which aims to introduce innovative projects that lead the world in tackling climate change, and the "Digital New Deal," which strives to move the nation into the future by digitizing "every aspect of the country’s social overhead capital" and thus building a more inclusive and accessible society.

Under these renditions, Moon’s administration has set specific targets, such as delivering 100 million electric cars and 200,000 hydrogen cars, building 5G and artificial intelligence infrastructure, and creating over 1.9 million jobs by 2025. Notwithstanding the merit in engaging with the other Indo-Pacific initiatives, India must take note of the prospects this policy provides for collaboration, so as to improve the efficacy of India’s own initiatives.

NSP, Seoul’s international cooperation venture based around ASEAN and India, has foreign policy similarities with India’s AEP. A similar synergy with India’s post-COVID economic revival ventures like "Aatmanirbhar Bharat" (self-reliant India) and South Korea’s New Deal must be promoted. Here, note that Modi’s call for self-reliance to help post-COVID financial growth and limit reliance on Chinese supply chains has major international strategy perspectives, despite being a homegrown and domestically focused venture. Aatmanirbar Bharat centers on combining "domestic production and consumption with global supply chains," yet does not restrict itself by being "self-contained" or "closed to the world." Moon’s "New Deal" should likewise incorporate a parallel drive.

Both initiatives can thus pursue collaboration in areas like digitalizing government infrastructure and services so as to reach rural and socially disadvantaged people, strengthening data, creating a smart health system and innovating state-of-the-art technologies that enable sustainable growth.

While digitalization and enhanced digital connectivity are increasingly shaping the future, taking these efforts forward in an ecologically sustainable manner is an equally important objective. As for South Korea (which has the second-worst air quality among advanced economies), climate change is a critical concern for India, too. A recent Stanford University study found that the Indian economy was 31 percent smaller than it could have been today due to environmental ruin. Another World Bank report calculated that environmental degradation cost the country 5.7 percent ($80 billion) of its economy yearly.

In this context, the Green New Deal offers a plethora of avenues for cooperation as both countries can coordinate strategies to imbibe their post-pandemic economies with a green character. Under their "special strategic partnership," India and ROK can explore, plan and implement cutting-edge projects with the aim of driving the establishment of smart and green cities/grids. Such collaboration could also come through India’s participation under the Korea Green Growth Initiative (KGGI) and an expanded India-France-driven International Solar Alliance (ISA) that includes Seoul.

At the same time, the pandemic has made the perils of over-dependence on China abundantly clear. Excessive reliance on China has, in recent times, become a vital cause of concern for Seoul ― a concern drilled in by the ramifications of China’s economic retaliation in response to ROK’s decision to host American THAAD (Terminal High Altitude Area Defense) missile systems. In this sense, the New Deal offers additional avenues for Seoul to pivot to India, with which it shares much ideological parlance, and in terms of geopolitical strategy.

Revitalizing the economy and creating more jobs ― the central aim of the K-New Deal ― could be more swiftly achieved with stronger trade between both countries. Cooperation between "Invest India" and South Korea has led to the greater presence of Indian companies like Novelis, Tata Motors and Mahindra in South Korea; concurrently, Korean companies like Samsung, LG Corporation, Kia Motors, POSCO and Hyundai have become major names in India. New Delhi has already initiated platforms like "Korea Plus" under its Department of Industrial Policy and Promotion. Now, the New Deal offers it a fresh avenue to achieve its ambitions by encouraging closer collaboration with Aatmanirbhar Bharat, especially in new sectors like health infrastructure.

South Korea’s success at containing the COVID-19 pandemic led to its inclusion in the U.S.-led "Quad Plus" framework under the Quadrilateral Security Dialogue. However, inclusion in this framework, the structure of which is still in its nascent stage, is not limited to the global health response to the pandemic. Instead, it highlights how the U.S. wants South Korea in Indo-Pacific narratives despite Seoul’s reservations or hesitation to embrace to the terminology "Indo-Pacific," and what it involves. In this regard, the India-South Korea partnership has major potential to grow multilaterally as well; when both countries see new prospects of multilateral cooperation with the invitation by U.S. President Trump to the Group of Seven (G7), and the United Kingdom’s Democratic-10 (D10) framework.

With respect to D10’s 5G technology focused goals, the platform can provide India and South Korea an opportunity to engage globally with industrialized democracies via their Digital India and Digital New Deal initiatives, respectively. Because both programs have similar goals (as noted earlier), they could synergize efforts multilaterally under the D10 umbrella or perhaps through other multilateral forums. Korea’s new policy could, for instance, find incredible synergy with the India-Japan-Australia driven Supply Chain Resilience Initiative (SCRI).

Although still in its initial stages, the platform is already seeking coordination with the broader region including ASEAN; South Korea can emerge as a part of the SCRI’s narrative in its early phase if it manages to ease tensions with Japan. At the same time, while a revival of the India-ROK’s CEPA is crucial for bringing focus on bilateral trade ties, both countries must also explore more free trade engagements. Such agreements can be vitally useful in attracting more foreign direct investments (FDI) for both nations in an attempt to offset COVID-19’s devastating economic repercussions.

In brief, pursuing economic cooperation is an effort both India and the ROK must explore and expedite under the current fiscal conditions. Amid COVID-19’s global upheaval, South Korea has firmly established its middle-power status even as it seeks a way out of China and the U.S.’s great power rivalry. Concurrently, in a post-Galwan period, India is increasingly pursuing partnerships (economic and security) in the region and attempting to maximize the situation by establishing itself as an attractive alternative economic destination. Under such conditions, India and the ROK can (and must) consolidate their business-government symbiotic ties and further enhance the building blocks of their bilateral development.