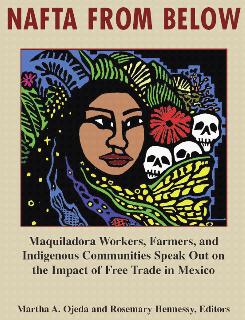 NAFTA from Below : A Review

NAFTA from Below is an important book. The full impact of the North American Free Trade Agreement on the working people of Mexico, the U.S., and Canada has yet to be assessed, but this slender volume makes a major contribution to our overall understanding of this disastrous economic treaty that was imposed on the people of all three nations by governments which routinely subvert democracy in the service of big capital.

The full title of the book is NAFTA from Below : Maquiladora Workers, Farmers, and Indigenous Communities Speak Out on the Impact of Free Trade in Mexico. The grassroots perspective of the book is no surprise — both Martha A. Ojeda and Rosemary Hennessy, the co-editors of the book, are long-time, cross-border activists and active members of the Coalition for Justice in the Maquiladoras (CJM).

The grassroots perspective of NAFTA from Below is also its strength. The testimonies of the people of Mexico who have been grievously injured by the free trade agreement with the North and are fighting back provide the spine and constitute the bulk of the book. Each individual narrative adds life to the whole :

The story of FUTURO, a group fighting for health and safety in Valle Hermoso

Establishing viable alternatives to state and foreign domination in Chiapas

And more. All of this is told with the urgency and authenticity that only participant observers can supply. But there is an additional bonus for readers, in NAFTA from Below, a big bonus.

The Political Economy of NAFTA

In the four pages of the Preface and dozen pages of Chapter 1, Ojeda and Hennessy debunk the myths that were pitched to the citizens of North America in order to sell NAFTA and present the political and economic analysis necessary to put the current people’s struggles in Mexico into historical context.

Taken together, the narratives and the keen editorial analysis of NAFTA from Below offer something that conventional histories and textbook treatments of the same topic do not provide — a solid platform on which to stage successful resistance.

Just reading the book serves to ground your thinking solidly in the concrete. NAFTA from Below (English or Spanish) is available online at www.coalitionforjustice.net or order direct from :

Richard D. Vogel is a political reporter who lives in Texas and monitors labor, immigration, and prison issues. He is the author of "The NAFTA Corridors ; Offshoring U.S. Transportation Jobs to Mexico" and "Transient Servitude : The U.S. Guest Worker Program for Exploiting Mexican and Central American Workers." Contact : [email protected]