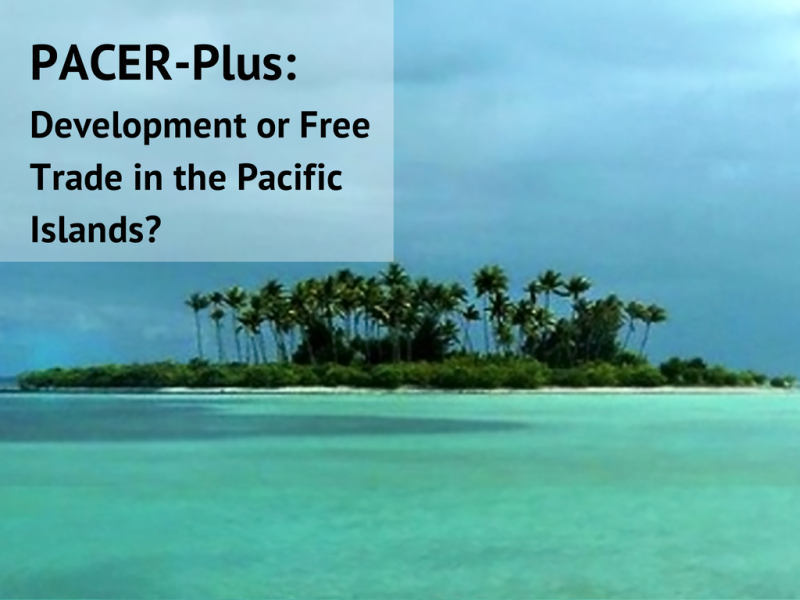 The latest round of negotiations on a proposed Pacific free trade agreement have wrapped up.

Trade ministers from Pacific Island Forum countries including Australia and New Zealand gathered in Christchurch on Friday to try to sign off on the negotiations which have been going on for more than 8 years.

Our reporter Koroi Hawkins was in Christchurch and filed this report.

New Zealand’s trade minister, Todd McClay, says he is delighted with the progress that has been made towards finalising PACER Plus.

"From here we will send information to our leaders to show that the progress has been made and the chapters are closed and we now also need to conclude the market access negotiations and ministers have agreed we should do this by the end of October. And we have set a target of signing PACER-Plus before the end of this year."

Mr McClay also announced that New Zealand and Australia would provide a US$5.8 million funding package for Pacific countries for the ratification process, which will include customs, revenue and legislative support.

"And that demonstrates our ongoing commitment to the relationship that Australia and New Zealand has with Pacific island nations. It also underlines the development component of this agreement. This is not just a trade agreement that is good for Pacific island countries. It is a development agreement which will deliver significantly for the citizens of Pacific Island nations."

But the proposed agreement has been controversial, with some groups arguing it favours New Zealand and Australia to the detriment of small Pacific economies. At least 55 organisations and more than 200 people from around a region have signed a petition calling for the deal to be stopped, at least until an independent assessment is carried out. A campaigner from Pacific Network on Globalisation, Adam Wolfenden, says because negotiations have been done in secret, it’s not clear what Pacific countries are signing up for.

"What we are worried about is what this will mean down the line when governments are trying to develop and they are trying to implement new policies either for the environment, for women, or for livelihoods and they will come up against the restrictions that PACER-Plus will contain."

Oxfam New Zealand is one of the organisations supporting Mr Wolfenden’s call. Its Executive Director Rachael Le Mesurier says she is concerned about the indirect effects the agreement will have on small businesses across the remote Pacific.

"This is such a significant treaty for the Pacific. It has impacts across the board. I mean from small businesses all the way through to how businesses are able to raise tax. And it is something that to go into this it is important that both the governments and the individuals are as informed as possible."

But the lead spokesperson for the Pacific Island Forum countries, Joseph Ma’ahanua, who is also the permanent secretary at the Solomon Islands foreign ministry, says PACER-Plus takes all these things into consideration.

"We have achieved a deal which is balanced in terms of helping us to develop our trade capacity. While at the same time also offering us the opportunity to be able to help our economies work towards the kind of growth which would help us in our development aspirations"

Contrasting with PNG, the Cook Islands finance minister, Mark Brown, says while services - not trade - are the bread and butter of the Cook Islands he still feels it’s important to be part of the agreement.

"I know that later on as we develop small niche type opportunities for trade amongst our countries, the PACER-Plus agreement will be a huge benefit for those Cook Islanders who are moving into those areas of trade in commodities and goods."

Many compromises have been made, but one of the largest has been the Pacific countries dropping their once-loud call for a legally-binding agreement on labour mobility. Mr Ma’ahanua says the deal exclusive to Pacific countries.

"Basically for PACER-Plus we see it as a three pillared entity. The first part is the legally binding trade issues. The second is the provision of development assistance and support. And third is the labour mobility."

There is still a lot of work to be done to fill the shell of legal text but if all goes according to plan then there may be a region-wide trade deal in the Pacific by the year’s end.