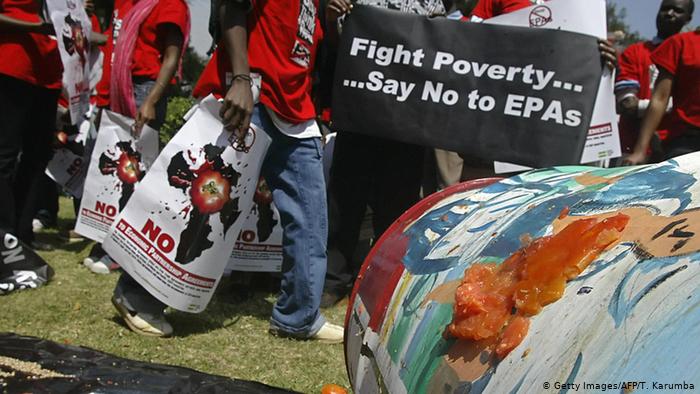 In 2002 the European Union adopted a negotiating mandate for the negotiations of so-called “Economic Partnership Agreements” with 76 countries from Africa, the Caribbean and the Pacific (the ACP countries), more than half of which were at that time least-developed countries.

The ACP countries as a group had accepted to negotiate “WTO compatible trade agreements” in the context of the new EU-ACP partnership agreement signed in 2000 in Cotonou. For the ACP countries EPAs would be about the trade in goods and would preserve the preferential market access to the EU which they had been receiving for many years, but that had been found WTO incompatible (because they discriminated against non-ACP developing countries. The EU however adopted a negotiating mandate for comprehensive agreements in line with their push for a Millennium Round in the WTO, i.e. including services, investments, government procurement, trade facilitation, competition policy, IPR etc. This was denounced by most ACP countries and triggered an all EU-ACP wide “STOP EPA” campaign.

The mismatch between the EU mandate and the ACP mandate and expectations led to very difficult and tense negotiations that delivered a lot of frustration and little result. By the original deadline for the negotiations, 31 December 2007, only one region (15 countries), the Caribbean, had accepted a comprehensive EPA. 20 other countries initialled “interim” EPAs on goods only, to secure the continuation of their exports. 41 countries did not accept an agreement.

Since then the EU continued to push for comprehensive EPAs until 2009 when the then Trade Commissioner Ashton had to promise in the European Parliament to only negotiate non goods issues with countries that wished to do so. Still, 5 years later the European Commission had to threaten to withdraw preferential market access in order to force ACP countries to ratify their goods only interim EPAs. Even today the score is that only 30 ACP countries are implementing an (interim-) EPA.

On the other hand the so-called ESA-region, consisting of five countries in Eastern and Southern Africa (Mauritius, Seychelles, Madagascar, Comoros and Zimbabwe) have recently approached the EU to broaden and deepen their interim EPA and to bring it to the level of the Caribbean EPA. The negotiations were launched in October 2019 and a first negotiation round took place on 14-15 January in the Seychelles.

In the meantime however, on 19 December 2019 the EU had adopted a new negotiating mandate a the last meeting of the year of the Council of Ministers of the EU. No separate press release or announcement of the new mandate was made or has been made since then. Despite the explicit request of the EU member states for it to be public it has also not yet been posted on the website of the European Commission as is the case normally.

However the mandate can be found in the online archive of the Council: https://data.consilium.europa.eu/doc/document/ST-14899-2019-ADD-1/en/pdf

The new mandate comes as a revision of the 2002 mandate and needs to be checked against the original version to see what is new. Here is a document that shows the deletions and additions made to the original 2002 EPA negotiating mandate. The new mandate is much more far-reaching than the 2002 version as it incorporates everything that the EU has been pushing in its FTAs since CETA including ISDS, digital trade, regulatory disciplines, investment and trade facilitation, far reaching IPR, comprehensive TBT and SPS chapters , etc.

And the first such EPA, that will become the template for all ACP regions, will be drafted with the ESA region which includes two LDC’s (Madagascar and the Comoros). In 2002 the EU was the first rich country block to negotiate reciprocal free trade agreements (aka EPAs) with LDCs, now the EU will be the first to do a deep and comprehensive new generation trade agreement with LDCs. How will these countries be able to cope with that?

The other question is will the EU start pushing all EPA countries to deepen and expend their EPAs; i.e. will the EU trigger the rendez-vous clauses that it inserted in the existing interim EPAs in 2007 (clauses in which the parties committed to reopen the negotiations at a later stage to complete the interim EPAs and add non-goods issues)? Probably not for the moment, but the EU will respond positively to requests. It may for instance also launch services negotiations with the Southern African EPA countries that have already has expressed interests in that direction (Botswana, Lesotho, eSwatini, Mozambique).

Hopefully by then civil society will have revived the "STOP EPA" campaign (if its already overloaded capacity will allow?).