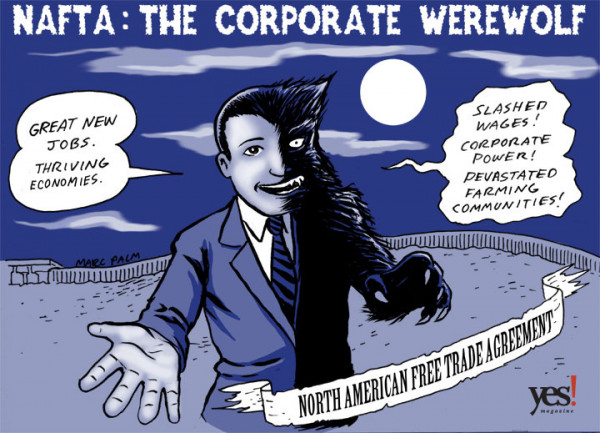 It appears Canada will not be ratifying the new NAFTA unless the U.S. gets rid of steel and aluminum tariffs. According to news reports, Transport Minister Marc Garneau told a National Governors Association audience in Washington on February 24 that, unless the steel tariffs come off, it will be very hard to pass the new agreement before Parliament’s summer break.

Canada is not alone. an Associated Press report quoted U.S. Senator Chuck Grassley as saying, after a meeting with the Mexican ambassador to the U.S. Martha Bárcena Coquilast, that Mexico also won’t ratify the deal until steel tariffs come off. He added that this is the position of congressional Republicans and Democrats in the U.S. as well.

This has led some to speculate that the tariffs were coming off soon. Canada’s ambassador to the U.S., David MacNaughton, said he believed the tariffs would end in the next few weeks. The U.S. initiated these tariffs outside NAFTA, saying steel and aluminium imports were security threats to the U.S. Canada and Mexico retaliated by imposing tariffs on U.S. goods.

With the U.S. House Democrats pushing to reopen and change aspects of the deal, Canada would do best to wait until U.S. ratification. But historically, Canada has been eager to pass any free trade agreement at any cost : witness the Canada-Europe trade agreement, and the so-called Comprehensive and Progressive Agreement for Trans-Pacific Partnership.

In fact, Canada has rushed towards its ratification process. With the deal signed on November 30, it was tabled in Parliament on December 13. According to parliamentary procedure, it must be tabled for 21 sitting days before it is presented in Parliament. This would bring us to March 17. This is the earliest that the government can introduce implementing legislation containing the changes to laws needed to comply with the new NAFTA. With a Liberal majority in Parliament, we have no doubt as to how this vote will go.

However, with the deal in flux in the United States, Canada would be ill-advised to push through the deal. A deal as important as this must be considered carefully. Canada should take this opportunity to push a progressive agenda and rid the deal of its many vital flaws.

As we head into an election in October, it is unlikely, if the deal is not passed by the summer, that it will be passed in the final months leading up to the election.

Since the new NAFTA was concluded, two important developments have changed the agreement. Firstly, the 2018 midterm elections produced a Democratic majority in the House of Representatives. These newly empowered Democrats are eager to flex their muscle and not give U.S. President Trump a win on the new NAFTA.

In particular, some Democrats and U.S. civil society groups want stronger enforceable environment and labour chapters and the end of new protections for pharmaceutical companies that would make biologic drugs, those made of human or animal content, more expensive. It would lock in data exclusivity for biologics to 10 years. Currently, it is eight years in Canada and five years in Mexico.

Politico Pro has reported that a group of House Democrats would not support the deal if it included these provisions. In an open letter, they urged the U.S. to go back to a "May 10th" agreement which kept data exclusivity for biologics to five years. At the same time, another group in Congress, supported by big business — big oil, big pharma, big farm and auto — are spending millions to promote the deal.

With Congress divided on the one hand, and the President embattled over his emergency measures to build a wall between the U.S. and Mexico on the other, passage of the deal through the U.S. Congress will be rocky. Furthermore, it is unlikely that it will get through Congress before the summer break, as scheduled.

For one thing, the partial U.S. government shutdown has delayed the procedures necessary to fulfill U.S. fast-track requirements. Congress requires a report by the U.S. International Trade Commission, which will not be coming out until April 19.

Trump has predictably threatened to pull out of NAFTA altogether if Congress doesn’t pass the new NAFTA, a threat that he withdrew in January. With multiple battles in play, the scope of the president’s actions may be limited, but he will certainly play a major role.

Theoretically, in another scenario, the U.S. deadlock could also mean that because of U.S. delays, Canadian legislation is not implemented until after the 2019 federal election, but it is too soon to tell. Of course, it is always possible that the U.S. Congress could delay or find itself unable to pass legislation.

In the meantime, Mexico has started procedures in its Senate to start ratification of the deal and to introduce legislation to improve labour rights and collective bargaining in the country, policies fully supported by the new progressive Mexican government headed by President Andrés Manual López Obrador. U.S. ratification of the new NAFTA is conditional on these changes.

Senate leader Ricardo Monreal of Morena, the president’s party, has said that the Senate will study the agreement clause by clause. While the Mexican ambassador to the U.S. has already said that Mexico made concessions on biologics, and many of the new NAFTA clauses actively go against the new Morena government’s plans for self-sufficiency and limiting exports, the government is mostly supporting the deal. They argue that the deal forces Mexico to make permanent changes to labour, collective bargaining, corruption and transparency policies, changes advocated by the Morena government.

The governments of both Canada and Mexico have said they will not consider reopening the agreement. As Scott Sinclair, Director of the Trade and Investment Research Project initiated by the Canadian Centre for Policy Alternatives, has noted, changes could be made with side letters, new assurances or conditions made in implementing legislation.

"One step forward, two steps back"

The Council of Canadians has argued that this deal is a matter of one step forward, two steps backward. The deal has significant improvements : the end of the Chapter 11 investor-state dispute settlement provisions between Canada and the U.S. which allow corporations to sue governments over their social and environmental policy changes when they interfere with profit, the end of mandatory energy export provisions, known as the energy proportionality clause, and a much more robust cultural exemption clause that would add protections for digital Canadian culture. The Council of Canadians and others have been in the forefront of those advocating for these changes over a period of decades.

However, the deal also includes new corporate-friendly provisions that make it antagonistic to people and the planet : newfound powers for corporations to influence and challenge regulations, increased protection for pharmaceutical companies, substantial erosion of protections for Canada’s small farmers and dairy producers, and insignificant, unenforceable environment provisions that don’t mention climate change, and incomplete labour provisions.

Faced with real 21st century problems — climate change and global inequality exacerbated by globalization and trade agreements — we cannot accept this unambitious agreement which fails to live up to major existential challenges.

The Canadian government should not rubber-stamp this deal or accelerate it through Parliament. It should take the opportunity to push for progressive changes.