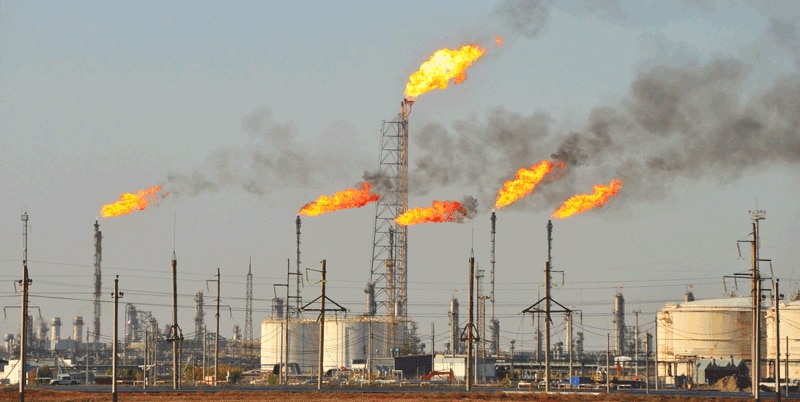 The coronavirus pandemic and record-low oil prices dealt a blow to the fossil fuel industry this year. But the new trade deal between the United States, Mexico, and Canada, known as the USMCA, will provide a boost as it replaces the North American Free Trade Agreement (NAFTA). The deal goes into effect July 1.

Reading between the lines of the 2,000-plus page deal, environmentalists say it is bad news for North America’s climate future. Far from addressing the crisis, the deal provides loopholes for oil, gas, and mining companies to operate across borders, and paves the way for U.S. companies to export even more fracked natural gas across the border into Mexico.

“The deal won’t lead to measures that will reduce greenhouse gas emissions,” says Gustavo Ampugnani, the executive director of Greenpeace Mexico. “On the contrary, it will accelerate the burning of fossil fuels.”

Environmental groups including the Sierra Club urged Congress to vote against the USMCA. In Mexico, the Better off Without Free Trade Agreements Coalition criticized the closed-door negotiation process. But even close allies of environmental groups in the Democratic Party ultimately voted to ratify the trade deal, arguing that they had negotiated improvements in the deal for labor rights, environmental protection, and prescription drugs.

From NAFTA to USMCA

When the last trade agreement for the region, NAFTA, went into effect in 1994, the state-run company Pemex dominated Mexico’s oil and gas industry. The Mexican government prohibited foreign investment in the sector, so NAFTA excluded hydrocarbons. That changed when then-Mexican President Enrique Peña Nieto backed a broad-reaching energy reform, opening the sector to foreign companies. Those reforms, adopted in 2014, sped up Mexico’s transition to natural gas. DeSmog reported in 2015 on the role of the U.S. State Department under Hillary Clinton in pushing the reforms.

Amidst a fracking boom north of the border, U.S. natural gas companies were well-placed to export to Mexico, which is now the biggest importer of natural gas from the U.S. Following Mexico’s national energy reforms, companies including TransCanada (now TC Energy), Sempra, Chevron, and ExxonMobil have gained a foothold in the lucrative Mexican market. Natural gas exports to Mexico have surged.

“It’s clear that the U.S. has a glut of natural gas and needs to sell it,” says Amanda Maxwell, of the Latin America Program at the Natural Resources Defense Council (NRDC). “Mexico is the perfect market for that.”

The USMCA locks in this pattern for years to come. The deal includes an automatic gas export guarantee for gas corporations, which means that because of the free trade status of the partner countries, th U.S. government does not need to prove that exports are in the “national interest.” The time-consuming permitting and regulatory process for natural gas exports has been an obstacle to exporting more LNG. The deal also lifts tariffs on tar sands oil imported to the U.S. from Canada.

“The fossil fuel industry wants to turn Texas into a resource extraction colony,” she says. The Rio Grande Valley, where Hinojosa lives, has high poverty rates and a majority Latino population.

“This is all part of a bigger international fracking cycle and that’s why we’re building a movement,” she says.

The USMCA eliminates ISDS, except for select sectors, including gas and oil. Todd Tucker, a political scientist at the Roosevelt Institute, a progressive think tank, says ISDS will continue to protect fossil fuel companies.

“There’s a reorientation of the ISDS mechanism to more specifically benefit the fossil fuel industry,” says Tucker. “It’s going to disproportionately impact efforts to improve the environment in Mexico.”

The American Petroleum Institute, the powerful U.S. oil and gas trade group, has already complained that Mexico is in violation of the USMCA before it even goes into effect. CEO Michael Sommers wrote in a June 11 letter that actions from Mexican regulators, such as permit delays and inspections, undermine the agreement and “discriminate against U.S. investors.”

A Bad Deal for the Climate

The USMCA misses an opportunity to push both the U.S. and Mexico to act on the climate crisis. At the federal level in the U.S., President Donald Trump has been weakening and removing climate and environmental protections and begun withdrawing the nation from the landmark Paris Climate Agreement. Mexico has pledged to reduce greenhouse gas emissions to 22 percent below a business-as-usual baseline by 2030 and 50 percent below 2000 levels by 2050. But President Andrés Manuel López Obrador, who entered office in 2018, has renewed support for Pemex and oil refineries.

Renewable energy development has been an afterthought under López Obrador. In May, Mexico’s Energy Secretariat used the cover of the coronavirus pandemic to publish new regulations that limit the number of new renewable energy plants. A judge halted the regulations, but investors see it as a sign that the López Obrador administration seeks to roll back reforms.

The USMCA’s environmental and climate impacts received little attention compared to hot button issues like the auto industry and sourcing requirements. Ultimately, bipartisan support for the USMCA hinged on stabilizing markets after an uncertain negotiating period.

Mexico depends on trade with the United States, and as the country faces a grim economic forecast, López Obrador is wary of troubling relations with the Trump administration. The Mexican president plans to meet with Trump in Washington to mark the beginning of the USMCA, a remarkable decision considering the worsening pandemic and the fact that he has not left the country since he took office in December 2018.

Advocates say that trade deals could be written with climate change in mind, to push partner countries to harmonize their regulations and ensure that polluting industries do not take advantage of lax regulations in one country.

The Roosevelt Institute’s Tucker says that climate change could be the focal point to reimagine North American trade. “If you had progressive governments, or even, non-climate skeptic governments, in the three North American countries, you could develop a vision on a regional basis,” says Tucker.

Tucker points to the European Union as a model to follow, where French President Emmanuel Macron is promoting a “carbon border tax” that would protect companies that invest in clean technologies from fossil fuel-intensive competition from abroad.

“We want a trade deal that supports climate action on both sides of the border rather than help corporations dodge our climate policies by shifting their pollution across that border,” says Beachy of the Sierra Club.

Trade deals like NAFTA and the USMCA are part of the political and economic infrastructure that make fossil fuel companies impervious to crises. Instead of shaping a regional strategy to confront the global climate crisis, the new trade deal instead locks the three countries into more business as usual.