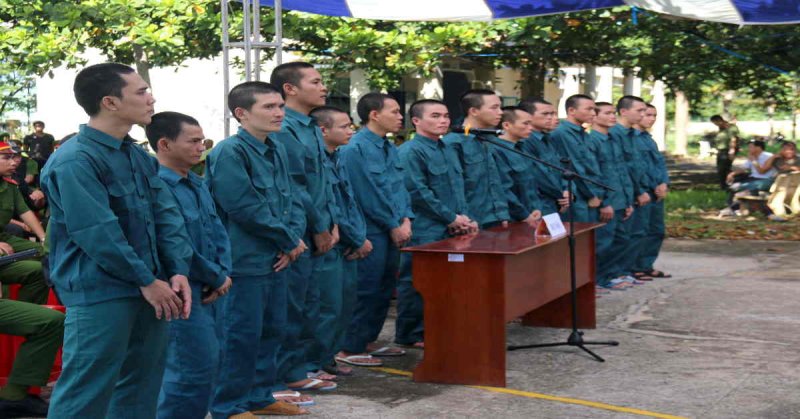 Dear Member of the European Parliament,

We are writing ahead of the February 11th plenary vote on the EU-Vietnam Free Trade Agreement (EVFTA) and Investment Protection Agreement (IPA) to urge you to vote for postponing Parliament’s consent to the deals until the Vietnamese government agrees to meet concrete and verifiable benchmarks to protect labour rights and human rights.

Despite Vietnam’s failure to meaningfully meet repeated requests for human rights improvements formulated by MEPs, on 21 January a large majority in the International Trade Committee (INTA) voted in favour of granting swift consent to the agreements, countering the opinion given by the Foreign Affairs Committee (AFET) and ignoring repeated pledges formulated by many international and Vietnamese NGOs[1]. For the reasons detailed in the annex, we deeply regret that decision, and call on MEPs in plenary to correct that mistake.

There are notable precedents of the European Parliament setting human rights benchmarks to be met before giving their consent to bilateral deals in order to promote human rights progress, in line with the commitments laid out in article 21 of the Treaty of the European Union. Among the most recent ones is the 2016 consent to the EU textiles trade deal with Uzbekistan, which Parliament only granted after there was reasonable ground to conclude that the country had taken serious efforts to eradicate child labour. Similarly, the EP has persistently refused to ratify the EU-Turkmenistan PCA, due to the country’s reluctance to make any progress in the field of human rights and the rule of law – a position last reiterated in a March 2019 resolution.

The European Parliament should take the same approach with Vietnam, withholding Parliament’s consent and approving a parallel resolution laying out the human rights conditions that Vietnam should meet for MEPs to greenlight the deal. These should include, at a minimum:

The choice MEPs have to make on 11 February is a very simple one: either postpone consent to the agreements and send Hanoi a clear message that they are serious about their calls for human rights improvements; or grant consent despite the lack of any meaningful improvement or imminent prospect thereof, and send the opposite message.

We hope that you make the right choice.

Regrettably, on 21 January the International Trade Committee (INTA) endorsed the EVFTA and IPA, paving the way for the upcoming plenary vote. Trade MEPs decided not to follow the position expressed by their own foreign affairs colleagues, as well as by many international and Vietnamese NGOs, who called for postponing Parliament’s consent in light of the Vietnamese government’s failure to meet any of the requests for human rights improvements formulated by MEPs[2] and by EU member states[3].

Despite repeated requests, human rights NGOs have never had a chance to brief the Committee. We also note the recent decision by MEP Jan Zahradil to step down from his longstanding role as rapporteur for the trade deals, following allegations of conflict of interests over his institutional links with the Vietnamese government, bearing in mind the alleged conflict of interest may have had impact on the parliamentary process leading to the 11 February vote.

INTA Members have justified their vote making reference to what they consider as two positive developments stemming from their diplomacy with Vietnamese authorities, namely:

INTA had requested a commitment to reform the penal code to be compatible with labour rights, but this request was patently ignored. They had also called for the release of Pham Chi Dung, the Vietnamese activist detained for his outreach to the European Parliament, but the Vietnamese ambassador, in a risible reply, defended the arrest and compared limits on freedom of expression in Vietnam to those in place in Europe.

The detention of Pham is far from an isolated case. Scores of human rights defenders, trade unionists, environmental activists, religious leaders, journalists, bloggers and lawyers are sent to prison under draconian penal code provisions that criminalise any expression of criticism to the government or Communist Party of Vietnam. Increasingly, people are being prosecuted for nothing more than the publication of Facebook posts. In 2019 alone, at least 30 people were arrested or convicted for peacefully expressing their views, leading the total number of political prisoners in Vietnam to at least 144 , in a trend of systematic repression of peaceful expression which the EU itself recognised has been intensifying in recent years.

Some argue that the EU-Vietnam trade agreements will indirectly lead to general human rights improvements in the country as a result of potential creation of jobs and economic development; others make reference to the agreements’ trade and sustainable development (TSD) chapter. Others also argue that the human rights clause in the EU-Vietnam Partnership and Cooperation Agreement (PCA), which provides that the EU can suspend the trade deals in the event that Vietnam commits grave human rights violations, would provide the EU with strong leverage over the country.

All these claims are highly questionable.

Firstly, Vietnam has already enjoyed major economic growth without these agreements: there is little evidence to suggest that EU tariff restrictions have unduly held back economic improvements in Vietnam in the last two decades. Meanwhile, there is little empirical evidence that economic growth in repressive regimes leads to general improvements in civil and political rights – it has not for example been the case in China.

Secondly, the TSD chapter’s provisions are weak and contain no enforceable language. They include only vaguely formulated commitments with no penalties, timelines, or deadlines. In the current climate of systematic repression of independent civil society in the country some of the TSD provisions —for instance, the creation of domestic advisory groups, or DAGs, tasked with overseeing the implementation of the deals, are in practice unrealistic. According to the text, the DAGs should be comprised of independent civil society from both the EU and Vietnam, yet it would be very difficult if not impossible to identify any group in Vietnam that could operate independently and properly exercise a monitoring role without fear of government harassment, retaliation, violence or prosecution. The delegation of INTA MEPs who travelled to Vietnam in later October was promised that independent trade union representatives would be included in the DAGs; to date, as noted above, independent trade unions are not even allowed to form and operate.

Thirdly, it is also in practice unrealistic to foresee the PCA’s human rights clause being used to suspend the EU-Vietnam trade deals as a retaliatory measure for human rights abuses by the government, even if theoretically possible:

Once Parliament grants consent to the deals, it will relinquish all leverage on Vietnamese authorities.