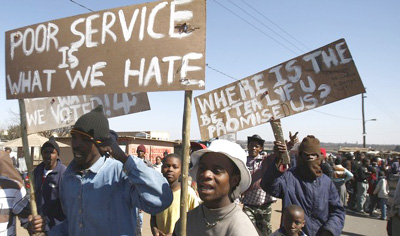 In 2014, the European Union concluded negotiations with six African countries to form a new Economic Partnership Agreement (EPA). The EU-South African Development Community (EU-SADC) aims to create a free trade relationship among the European Union, Botswana, Lesotho, Mozambique, Namibia, South Africa, and Swaziland. In theory, such a free trade arrangement should end any discriminatory preferential trade agreements in the area, as well as strengthen trade and development in southern Africa. However, a new discussion paper from IFPRI’s Markets, Trade and Institutions Division finds that new trade stemming from the EPA will not be very extensive, and that any poverty reduction effects will also likely be quite small.

The EPA includes several important provisions. First, it provides an asymmetric access to the partners in the SADC EPA region, meaning that SADC countries have better access to the EU market than the EU exporters in the SADC region. Second in the SADC group, the EU grants differing levels of access to its partners. While Botswana, Lesotho, Mozambique, Namibia, and Swaziland benefit from a full (100 percent) duty-free, quota-free access to the EU market (excluding arms), the agreement offers to South Africa a 95 percent access to the EU market. In addition, South Africa will receive better trading terms for agricultural and fisheries products in addition to its current Trade, Development and Cooperation Agreement (TDCA) with the EU, which provides free trade to 90 percent of the partners’ bilateral trade. The EU, on the other hand, receives expanded market access into the Southern African Customs Union (SACU) for wheat, barley, cheese, butter, and meat products. The agreement has also a bilateral protocol between the EU and South Africa on trade in wines and spirits and on the protection of geographical indications. Under that protocol, South Africa will grant exclusivity to more than 250 European products (including wines and spirits) and the EU will give exclusivity to South Africa to use names such as Rooibos (for infusions) or Stellenbosch for wines. Finally, the agreement includes provisions on non-tariff measures, particularly on the prohibition of quantitative restrictions and on the national treatment on internal taxation and regulation.

The IFPRI paper uses a multi-sector, multi-country computable general equilibrium (CGE) model to examine the effects of the EPA on welfare, production, government revenues, and poverty among the partner countries. The model takes into account Africa’s informal economic sectors and looks at the countries’ actual government revenues rather than nominal duties. The study also addresses poverty at the household level by using a micro-data-based analysis that looks at changes in incomes and labor markets.

As the paper points out, much of the trade between the EU and the SADC countries is already fairly liberalized, in particular exports from SADC to the EU market. SADC countries exports to the EU already are either duty-free, quota-free or face low levels of protection. Lesotho and Mozambique, as Least Developed Countries, already have duty-free, quota-free access to EU markets for all goods except armaments. As mentioned above, South Africa already benefits from the TDCA, and Botswana, Namibia, Swaziland, and South Africa also all benefit from other existing preferences granted by the EU (although these last preferences would have expired if the new EPA had not been signed). Thus, the EPA does not greatly change the trade relationship between the two regions, maintaining favorable access to the EU markets for Southern African economies but also requiring some additional efforts from the most vulnerable countries.

The study’s estimates find positive but very limited impacts for trade flows, GDP growth, welfare, and poverty reduction. Exports from the African countries to the EU increase more than exports from the EU to its SADC partners. Import duties placed by the SADC countries on EU imports declined very slightly; for example, the study estimates that Namibia would see a decline in import duties from 3.5 percent at baseline (2014) to 3.48 percent in 2035. The EU would also see very slight improvements in its foreign market access, as would South Africa, Namibia, Swaziland, and Lesotho.

The only significant change in trade flows is estimated to be that from the EU to Mozambique and South Africa. The study estimates average protection to decline for these trade flows from 7.48 percent to 6.33 percent for Mozambique and from 5.68 percent to 5.17 percent for South Africa. Such increase in trade flows may result less from the EPA, however, than from the fact that these two countries impose more protections on goods coming from areas outside the EU and SADC.

In terms of production, on the EU side, only the sugar sector experiences any significant decrease, falling by 0.27 percent based on expanded sugar exports from Swaziland. The EU wearing apparel and textile sectors see the largest increase, at 0.03 percent. On the SADC side, the largest increase is seen in the sugar sector in Swaziland and Lesotho (combined); production in this sector increases by 80.85 percent. However, as the sector only represents a tiny fraction (0.6) of the region’s total production, this increase is not as significant as it may seem at first glance. Meat and cattle production in Namibia also increases slightly under the EPA due to the opening of EU borders to these products.

Since the collection of domestic indirect or direct taxes is not efficient in many African countries the issue of customs tariffs is usually mentioned as of particular concern because they represent an important part of the revenues for these countries. However, since the EPA does not entail a substantial reduction in custom duties for these countries, the study shows that the reform has only a limited, mixed impact on these public revenues. Mozambique (-1.43%), South Africa (—0.58%), and Namibia (-0.15%) see a reduction in the amount of customs duties collected, while Botswana (+0.03%), Swaziland (+1.60%), and Namibia (+1.60%) see small gains in customs revenues. Thus, the EPA does not seem to have a negative impact on this important revenue source, as some critics have feared.

The study finds that globally, the reform has little to no impact on GDP or incomes; within the SADC, increases to both are positive but insignificant for most countries. The exception is Lesotho and Swaziland (combined), which see an increase in GDP of 0.89 percent and an increase in real incomes of 1.15 percent.

Finally, the study looks specifically at poverty reduction in South Africa and Namibia. It finds that given the EPA’s small impact overall, the impact on poverty in these two countries is also small. For example, South Africa’s poverty head count (at US$1 per day) was 16.15 percent in 2000; this decreases to 11.45 percent without the reform in 2035 and to 11.44 percent with the reform.

The paper concludes by suggesting that, given the small benefits to be expected from the EPA, it may be more worthwhile for governments in the SADC region to consider regional trade agreements, which could lead to higher gains.