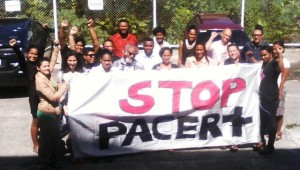 Oxfam calls for ‘no decision’ on Pacific free-trade agreement

Current negotiations on the PACER-Plus regional free trade agreement between Pacific Island countries, Australia and New Zealand are edging closer to completion, with Pacific people most likely to lose out in the deal.

The Pacific free-trade agreement has been heralded as a “development agreement” that will help build robust economies generate sustainable growth amongst the Pacific countries.

However, there are concerns about the potential impact of encouraging more foreign investment and greater access for overseas companies to the Pacific nations’ internal market.

A recently released report from the Pacific Network on Globalisation (PANG) highlights the threats posed to Pacific governments, including their right to regulate, the right to food for Pacific Islanders, significant negative health impacts, and disproportionate impacts that would be borne by women.

Oxfam supports the report’s recommendation that there be no decision on PACER-Plus until there is a fully-funded, no bias, independent assessment to allow Pacific people to make an informed decision about exactly what the agreement means.

Rachael Le Mesurier, Executive Director of Oxfam New Zealand said that Pacific economies face unique challenges and any regional trade policy must bear that in mind. “The Pacific is unique for its number of small island developing states and it is hard to see how a free trade agreement can be a fair trade agreement if small countries, with populations of a hundred thousand or less, are up against New Zealand, Australia and the WTO powers.

“Whilst the negotiators have gone some way to speak to these concerns the substance remains, that there are very real doubts as to whether PACER-Plus will provide fair benefit for those living in the Island nations.”

Civil society groups, trade unions, church groups, environmentalists, gender activists and many more are calling for Ministers to make no decision onPACER-Plus until there has been a proper social impact assessment and mandate from the Pacific people who are most likely to be affected.

Trade Ministers will meet in Christchurch on August 26th to further discuss PACER-Plus and make any recommendations to Leaders.