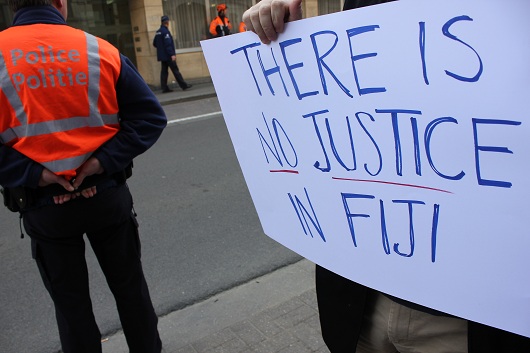 The regional free trade agreement, known as PACER-Plus, is being sold as a way for Pacific Island Countries to boost Pacific economies by allowing them to trade more.

However PACER-Plus is shaping up as an agreement that won’t fit into the Pacific reality, will have weak protections for Pacific businesses and undermines the ability of governments to enact policies to support and nurture vital Pacific industries.

PACER Plus, it is said, will “inject dynamism into the economies of the PICs” and give them the “significant benefits from international trade”. But what does this actually mean for Pacific businesses?

Ask any Pacific businesses person and they will tell you how hard it can be to run a business in the Pacific - whether dealing with logistics and barriers of infrastructure, distance, onerous quarantine restrictions for exports or under- priced imports that under-cut local markets.

Yet free trade ideas, like those driving PACER- Plus, argue that by opening themselves up to competition from global markets and major exporters, like Australia and New Zealand, the Pacific will have access to cheaper goods and become more competitive.

Such theory is based on large markets, economies of scale, and the possibilities of greater competition. The Pacific reality doesn’t match that theory. There are large distances to markets, natural barriers, and populations that can’t always support greater competition.

There is also the cultural and historical practices of the Pacific, with its customary control of land, networks of social obligation and general orientation to the communal over the individual.

The reality is that embracing the free trade model and it’s export-led growth is never going to work for the Pacific. The World Bank has acknowledged this stating that “Due to inherent geographic obstacles, PICs are unlikely to experience export-driven development and associated employment creation on the scale seen in the broader East Asia Pacific region.”

The Pacific has always traded and will continue to do so however it must happen in a way that reflects the Pacific’s unique and diverse reality, not an economic textbook.

Lack of support for Pacific Industries

The ability of governments to support and nurture local industries has been a key development policy tool for all industrialised countries. As the former Head of the Macroeconomics and Development Policies Branch, United Nations Conference on Trade and Development (UNCTAD) notes, no country (except Hong Kong, China) has managed to industrialise without going through the infant-industry-protection phase.

Tariff policy is part of a dynamic industrial policy, and tariffs vary depending on the level of development of a country and the needs of various domestic industries. For instance, at an early stage of development, tariffs on labour intensive and resource intensive products are generally raised selectively, after which tariffs move down but tariffs increase on low-technology intensive products.

However, PACER-plus is fixing a maximum applied level of ALL tariffs, even those that are not being liberalised. This will severely hamper any attempt for a tariff policy supportive of industrialisation and building domestic value chains. This is unacceptable for a ‘development agreement’.

PACER-Plus will also see Pacific Island Countries restricted in their ability to ensure that benefits from investment are maximised by using local inputs. Many developed countries have made investors use local resources (both people and materials) as a way to ensure that the gains and the development of skills and industries are widespread. This means that local content policies that directly or indirectly favour domestic products will be outlawed under PACER-Plus.

PACER-Plus will restrict the use of such policies for investments in both goods and services, removing a pro-development policy for the Pacific to use.

Any agreement on PACER-Plus will also see the ability of Pacific governments to use export subsidies undermined. The current proposals go beyond the existing rules in the World Trade Organisation and mean that any non-WTO member Pacific countries will have a limited time to state which export subsidies they will continue and then be unable to introduce any more. Export subsidies can be a vital tool in supporting Pacific exporters in establishing themselves.

Under PACER-Plus, Pacific governments will be making a number of commitments relating to revenue from trade. The most obvious one is the cuts to import taxes with extensive cuts being asked of the Pacific.

Tariffs are a simple and effective way for Pacific governments to raise revenue, promote the competitiveness of local industries and fund the enabling environment for Pacific businesses to succeed.

An updated analysis shows that tariff revenue losses will actually be more than previously calculated: Pacific countries are set to lose more than USD 200 million per year, based on imports during the years 201 2-201 4. For the individual countries the biggest loses will be Fiji: USD$71 million; PNG: USD$95million; Samoa and Solomon Islands: USD$1 1 million; Vanuatu and Tonga USD$6million. This means Vanuatu will almost half its health budget, PNG will lose nearly 40% of its budget for agriculture and SMEs, and Fiji will lose almost a quarter of its roads budget.

The commitments will also include other fees associated with trade which are important for government revenue. According to IMF figures, PNG relies on trade related taxes (tariffs and other fees) for over 9% of its government revenue – much of this will no longer be allowed under PACER-Plus.

These amounts are significant as they are vital for the ability of governments to provide essential services as well as build the infrastructure needed to will support businesses. According to IMF economists, if low income countries, like most FICs, cut their tariffs they are at best likely to recover 30% or less of this lost tariff revenue from other taxation sources.

PACER-Plus, and the subsequent loss of income that will come with it, will undermine the ability of Pacific governments to be able to build and support an environment conducive to Pacific businesses and those employed by them.

Policy space to nurture and protect domestic industries is an essential right for Pacific island countries. This right is unconditional and should not be linked with market access offers as proposed by Australia. The impacts of PACER-Plus on Pacific livelihoods are forecast to be huge with some economists estimating the loss of 75% of Pacific manufacturing jobs.

Sadly, the current proposals by the Pacific Island Countries themselves fail to meet those requirements. The safeguards proposed are too limited in their scope for use and the measures that can be taken. If agreed to, the Pacific would be accepting weaker safeguards than those already agreed to under the interim Economic Partnership Agreements signed by PNG, Fiji and the European Union.

The proposal by the Pacific also includes a requirement for an ’Investigation’ to justify the use of any safeguard. Such investigations are unheard of in other trade agreements and not only place an enormous burden of proof onto Pacific agencies but will open the door for exporters, government officials and others from Australia and New Zealand to intervene in the process to achieve an outcome that may not be in the best interests of island countries. Such a process will undermine the effectiveness of the Pacific protecting their industries.

Many Pacific countries feature strong agricultural sectors with many Pacific islanders engaging in some form of agrarian activity. As such ensuring that domestic producers are not overrun by the enormous export capacity of Australia and New Zealand is crucial. Safeguards and protections are meant to be used when things are going wrong, it is in those times when you need to ensure you have the best response possible. For Pacific farmers PACER-Plus continues to offer little in support. New Zealand has proposed a temporary safeguard (despite both Australia and New Zealand having a permanent one!) that again is too narrow in its scope to really support Pacific farmers.

Despite Australia having access to strong safeguards in other agreements, it has suggested that the ‘strength’ of any proposed safeguards should correspond to the level of tariff commitments to be undertaken by Pacific. A pro- development agreement would support strong safeguards because they are important to protect vulnerable and important industries regardless of the commitments made by some of the most vulnerable economies in the world.

The safeguard proposals under PACER-Plus fail to meet the most development-friendly global standards. Be that in terms of scope, usability, permanence, and even compensation, as such it is leaving Pacific livelihoods vastly under protected from the influx of imports from Australia and New Zealand that will flow from PACER-Plus.

Australia and New Zealand have Big Economic Interests in the Pacific

Australia and New Zealand argue that PACER- Plus is a development agreement focused on the Pacific’s interests. Australia has even gone as far as to say “there is nothing in it for us”. Whilst there may be altruistic motives wanting the Pacific to engage more in the Western notions of development, the reality is that there are economic incentives in PACER-Plus.

Given the size of the market of the Pacific, there are very real and very lucrative incentives to push for greater access of Australian and New Zealand exports into the Pacific. To argue that there is nothing in it for the regions biggest brothers is a deliberate deception.

Time to close down PACER-Plus

There can be benefits that come through the liberalization of trade but they can be adopted by any Pacific country as it chooses. Locking such actions in under PACER-Plus means that if it goes wrong there is little that country can do. Likewise and development assistance that may come from an agreement, there is no reason why Pacific businesses need to be held to ransom through PACER-Plus just to get some additional aid money.

There is no credible evidence that shows trade agreements result in any increased investment in countries. The false promises of benefits need to be seen for what they are – a snake oil sales pitch.

The real needs of Pacific businesses need to be addressed, PACER-Plus won’t do that.