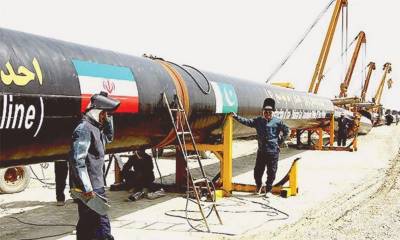 Pak-Iran FTA draft likely to be signed this month In an expected major development, Pakistan and Iran are most likely to finalise the draft for Free Trade Agreement (FTA) during the two-day talks on April 22-23 to be held in Islamabad.

The technical teams from both the sides will hold crucial interaction and are mostly likely to approve the draft for FTA.

According to a senior official at Commerce Ministry, both sides have worked a lot on the draft for FTA and now they are inclined to give green signal to the free trade deal.

At present, the trade between both the neighboring countries is underway under Preferential Trade Agreement (PTA) which was signed in 2006 and effective in 2007. And in financial year 2008-9, the trade between the two countries surged close to $1.32 billion, but after US and UN sanctions, the trade went down which now stands at almost $318 million out of which import from Iran stands at $280 million whereas exports are at just $35 million.

Pakistan exports dipped to just $35 million in 2018 from $350 million in 2018-9. The re-imposition of strict US sanctions by Trump administration is the main cause for lowest trade volume between the two countries.

The Preferential Trade Agreement (PTA) is no more functional. However, the imports from Iran stand at about $280 million.

“Iran which is the immediate neighboring country has the trade volume of $18 billion with India even in the presence of the US sanctions raising the eye brows as to why not Pakistan has managed to keep the trade with Iran at reasonable level. India imports from Iran the POL products worth $10 billion. Most of trade between Iran and India is based on barter system and this model has failed in the case of Pakistan.”

As far as the volume of bilateral trade between Pakistan and Iran is concerned, Tehran has flouted the PTA by increasing the unilateral tariffs on Pakistan products owing to which the Pakistan’s exports have tumbled to the lowest ever ebb of $318 million in 2015-16 from $1.32 billion in 2008-09.

The sources also divulged that Pakistani banks are still shy to carry out transactions with Iranian banks. The absence of the banking channels is the single largest obstacle to enhancing the trade. Nonetheless, State Bank of Pakistan and the main bank of Iran are also in talks for payment arrangements through banking channels.

Coming to the Preferential Trade Agreement, the official said, Pakistan has extended the tariff concessions to Iran over 320 tariff lines and Tehran has given the concessions on 309 tariff lines. But unfortunately part of the trade agreement is that the PTA is being flouted by Iran by increasing the tariffs on Pakistan products. Tehran has increased the tariffs on textile and clothing by up to 121 to over 100 percent. It has also imposed the increase in import duty on leather, footwear, fruits, vegetables and rice also. So much so authorities concerned in Iran have not spared Pakistani kino and slapped about 90 percent duty instead of 44 percent duty agreed in PTA. After 2012, Iran has imposed ban on imports of fruits from Pakistan which is still continuing.