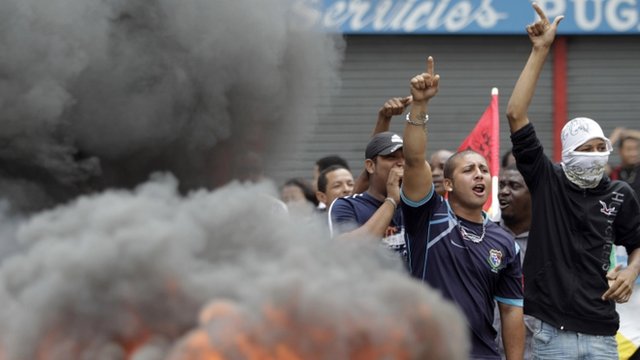 Panama’s President Ricardo Martinelli says he will scrap plans to sell off state-owned land in the duty-free zone of Colon, after violent protests.

Three people have been killed in the clashes between residents and security forces, local media report.

The protesters said the land sale, signed into law on Friday, would cost jobs and cut incomes.

The Colon region is the biggest duty-free zone in Latin America but is blighted by poverty and crime.

President Martinelli had said the sale of the state-owned land would benefit the region.

But late on Tuesday, he said on Twitter: "If the people of Colon don’t want the sale of lands in the Free Trade Zone, the sale will be repealed."

He said instead, commercial rents would be increased and the money reinvested in the region, as protesters had been demanding.

The president, who is on an official visit to Japan, has come under criticism for not breaking off his trip in the face of the continuing protests.

A 27-year-old woman became the latest person to die on Tuesday, following the death of a man and a nine-year-old boy in clashes over the past five days.

Opponents of the law included trade unions, members of the Colon Chamber of Commerce and a variety of civil society groups.

A government delegation which had travelled to Colon to meet the protesters returned to the capital, Panama City, on Tuesday after the activists refused to talk to them unless the new legislation was repealed.

Colon Chamber of Commerce President Anacleto Ceballos had announced on Tuesday that a 48-hour strike would be extended for another day.

Panama’s economy has boomed in recent years, but sections of the population remain excluded from its commercial success.

The city of Colon - one of the largest free trade ports in the world and in operation since the 1950s - sits at the end of the Panama Canal just outside the former Panama Canal Zone.

The canal, linking the Atlantic Ocean to the Pacific, is Panama’s main source of revenue.