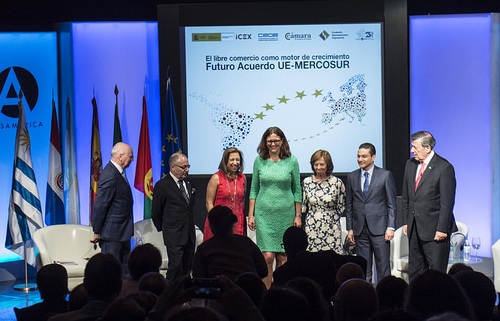 ASUNCIÓN – By mid-May, Mercosur and the European Union (EU) will have a new meeting to try to close the free trade agreement.

Paraguayan Foreign Minister Eladio Loizaga confirmed that he is in contact with his peers to define the date of the meeting that would be in Asunción.

The European Union and Mercosur want to close the free trade agreement that is being discussed almost twenty years ago by mid-year. The negotiators of both blocks agree that in the last year much progress was made and that an agreement is very close.

Minister Loizaga confirmed that he is in talks with his Mercosur colleagues to set a new meeting date with his European counterparts to adjust the final details and finally close the agreement.

“I’m talking with colleagues to set a date in the middle or end of this month to meet with European representatives. We are very confident in being able to reach an agreement shortly, “he said.

Two weeks ago the representatives of Mercosur and the European Union had a new negotiation round where there was little progress. The parties were optimistic, but also made it clear that there is a need for resignations to reach an agreement.

The Europeans, openly, asked Mercosur to be flexible; but Minister Loizaga indicated that the two sectors would have to make concessions in order to finally have a balanced and consensual text.

The free trade agreement with the EU has been held back from the last two meetings of negotiators because of the lack of consensus on issues related to the agricultural and automotive sectors. The main objector of the automotive issue is Brazil, which is not satisfied with a total opening of the regional market. It calls for a gradual process that extends for at least ten years.

While Europeans question the demands of Mercosur to enter the block unhindered with agricultural products.