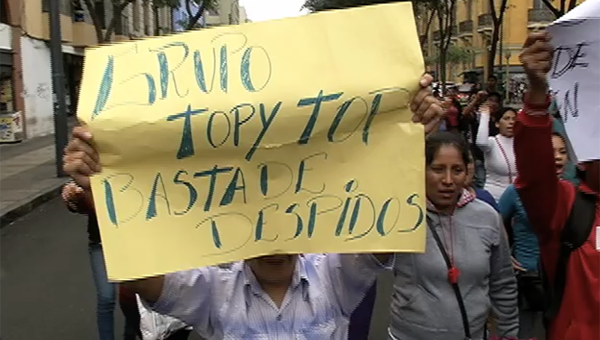 Analysts say policies initiated under the Free Trade Agreement with the U.S. have taken away labor rights for hundreds of thousands of working class Peruvian citizens. ​

Thousands of employees in the textile and agricultural industries are now working in precarious conditions due to the Free Trade Agreement with the United States, Peruvian labor unions announced on Thursday.

Labor union leaders claim that since the treaty was signed in 2009 worker’s rights have been increasingly under attack. Those textile and agricultural workers attempting to organize themselves into unions have been punished with group firings without termination benefits, the leaders say.

Lorena Chavera, a textile worker who says she was fired for becoming an active member of a labor union, told teleSUR English that she originally thought the signing of the free trade agreement with the United States was an opportunity to increase jobs.

However, after she started working with the textile company Camones, she got a startling wake-up call. Chavera said she and 204 other workers were fired because they were organizing protests demanding improvements of working conditions.

“The company stopped paying utilities on top of all the other labor violations that they were committing like not paying for overtime when we worked for longer hours,” she said.

Gerardo Olórtegui from the Federation of Textile Workers a group under the CGTP union conglomerate said that “businesses claim that they are not firing workers, but instead their contracts have come to an end. “This is the way they reducing the number of workers organized in unions,“ he said.

The Peruvian government assured that with the commercial opening of the country, working conditions were going to improve. However, labor law specialist Luis Mendoza, says that export companies have took advantage of special policies implemented after the Free Trade Agreement with the U.S. in 2009 and expanded the hiring of workers with limited labor rights.