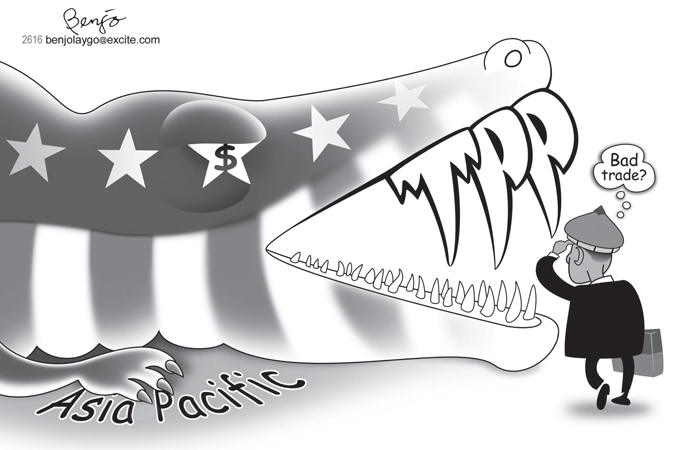 The Philippines is eager to join the 12-nation Trans Pacific Partnership trade deal and it has already held informal talks with the United States to do so, Trade Secretary Ramon Lopez said on Thursday.

In an interview with Reuters on the sidelines of ASEAN economy ministers meetings in Vientiane, Lopez said the key industries which would benefit would be electronics, automotives and garments.

"If you don’t take part in it you might lose some opportunities while other countries are enjoying them. We’d like to be part of that," Lopez said.

"The new government is one that will keep the policy of maximizing FTA (foreign trade agreements) participation. We’re close to the U.S. and we’ve had talks at an informal level."

The TPP has been dubbed a "mega-regional accord", and once in play would be the biggest trade pact in a generation.

It will be a boon in particular for lower cost manufacturing-led economies, with the prospect of sharp tariff cuts to markets like the United States already luring factory investment to TPP members.

Lopez said his country was in a good position to join, having separate FTAs in place with seven of the 12 countries already.

For the Philippines, the TPP, which covers a trade area worth $28 trillion of GDP, would open up the North American and the South American markets.

John Goyer, senior director for Southeast Asia at the U.S. Chamber of Commerce, said on the sidelines of the Laos event the signals from the new administration of President Rodrigo Duterte have been positive since he won the May election.

He said reforms would be needed though, one of the key ones being amendments to foreign equity rules, which require constitutional change and were a sticking point for the previous government.

However, suggestions to remove caps on foreign ownership in certain economic sectors were "well received" by the new government, Goyer said.

TPP negotiations concluded last year and the pact has been signed, but to take effect it requires ratification by members’ respective legislatures by February 2018.

The TPP is a signature policy of U.S. President Barack Obama but its ratification before he leaves office in January next year is uncertain, with many U.S. lawmakers running for re-election in November and facing a rising tide of anti-free-trade sentiment.