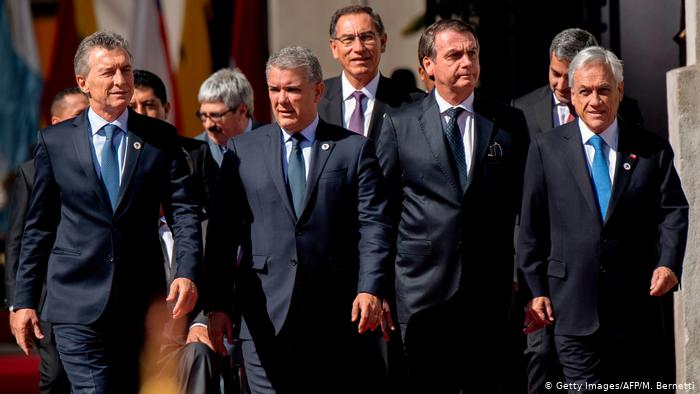 SANTIAGO – The presidents of Chile, Sebastián Piñera, and of Brazil, Jair Bolsonaro, set a road map on Saturday to give new impetus to the bilateral relationship, especially in the commercial sphere with the negotiation of a free trade agreement between both countries.

Bolsonaro ended his first visit to Chile the same day after speaking in tune about Venezuela, the FTA, and physical approximation with the bi-oceanic corridor with his Chilean counterpart.

He thanked Chile’s willingness to host the Conference on Climate Change, COP 25, which his government did not want to be in Brazil, as planned. Brazil has declined to host the event, citing impossible objectives.

“We can’t do a deal in which some of the goals are unattainable,” he said. “Brazil does not owe the world anything when it comes to environmental protection.”

The far-right leader, who is critical of the Paris climate change accord, was speaking in Chile following Friday’s launch of the Forum for the Progress of South America (PROSUR), a conservative-minded group of South American leaders.

Pinera and Duque were behind the idea of creating a new bloc to replace UNASUR, a largely defunct organization created in 2008 by late Venezuelan leader Hugo Chavez and his leftist Brazilian counterpart, Luiz Inacio Lula da Silva.

It is a tradition that the president of Brazil inaugurates his international agenda with a trip to Argentina, his partner in the Mercosur and his main commercial partner. Bolsonaro has broken with this custom, despite the ideological closeness he has with the conservative Mauricio Macri.

Bolsonaro made it clear that Argentina will continue to be important, but not as important as Chile. “I like Chile. We are your second commercial ally in South America, Christians, conservatives and with Piñera who is always open to trade. If I’m here, it’s because I like Chile and Piñera,” Bolsonaro said in an interview with La Tercera newspaper.

Chile is Brazil’s second largest trading partner in South America. And Brazil is the main destination for Chilean investments in the region.

In addition to political alignment, Jair Bolsonaro and Sebastián Piñera sought to further strengthen the relationship. They spoke out against the regime of Nicolás Maduro, in Venezuela; on integration; free trade agreement, which provides, for example, free international roaming; and physical approach with the bi-oceanic corridor, the way for Brazil to have access to the Chilean ports in the Pacific.

Sebastián Piñera stressed that these agreements strengthen the two economies.

On Saturday morning, the Brazilian president met with Chilean businessmen and at noon he visited Piñera, with whom he signed cooperation agreements.

The meeting with businessmen has been the high point of the agenda. For an hour, a dozen of them listened behind closed doors to the Brazilian in a hotel in the center of the capital.

Bolsonaro’s arrival comes amid the reproaches of the opposition to his views on homosexuality, for saying that “the error of the dictatorship (in his country) was torturing and not killing “or against women, when he said that “they must earn less because they get pregnant.”

In fact, the presidents of both houses of the Chilean Congress, the Senate, Jaime Quintana (PPD), and Deputies, Iván Flores (DC) were subtracted from the lunch that this Saturday the Piñera government will organize in his honor, arguing that the presence of Bolsonaro is not about a state visit.

Even some members of the Broad Front entered a document that seeks to declare as a person “non grata” the Brazilian ruler. In this regard, the Brazilian president downplayed the questioning indicating that everyone has the right to demonstrate emphasizing and that “we are in a democracy.”

Bolsonaro landed in Chile from the United States, where he met with his counterpart Donald Trump, with the aim of sealing a nascent conservative alliance, strengthen their economic and military ties, and increase pressure on Venezuela. In the coming weeks, he plans to travel to Israel and China.