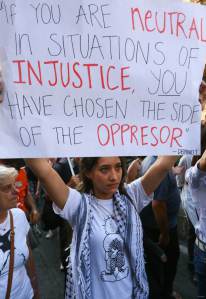 Powerlessness and confusion: The EU and Israel

Unless there is an awakening in the EU regarding both the severity of the plight of the Palestinians and EU’s immense clout vis-à-vis Israel, the situation in Israel-Palestine will only deteriorate.

The European Union policy towards Israel is shifting from all out collaboration with Israel to collaboration flavored with confusion. For example, national parliaments in Europe, one after the other, are calling for their governments to recognize Palestinian statehood. As of now, Sweden has gone a step further, becoming the only western EU member state which has formally recognized Palestinian statehood.

However, EU’s trade policy with Israel continues to be business as usual, including trade in military hardware. The EU-Israel Association Agreement – which the EU is obligated to freeze due to Israel breaching the association agreement’s criteria – is not going anywhere. Diplomatic relations are more or less what they used to be.

“The European parliament supports in principle recognition of Palestinian statehood and the two-state solution, and believes these should go hand in hand with the development of peace talks, which should be advanced.”

After 66 years of dispossession and 47 years of military occupation, colonization and fragmentation of the occupied Palestinian territories, this is what the MEPs in Strasbourg come up with. Who would dare to harbor any doubts on the EU’s claim to the Nobel Peace Prize!

In national legislatures within the EU, we are witnessing a wave of recommendations urging for recognition of Palestinian statehood. For example, the lower house of the Irish parliament called for the Irish government to recognize a Palestinian state. The motion sailed through the Dáil without any opposition. And a day after the Irish move, the French Senate followed suit, urging the cabinet to recognize an independent state of Palestine.

And again, a day after the French move, the Portuguese parliament became the sixth European assembly since October to turn to this gesture. But what do the parliaments mean when they refer to Palestinian statehood?

Europe keeps talking about the two-state solution, yet there is not much clarity on what that entails. If it refers to, say, 1967 borders or 1967 borders with minor and mutual adjustments, then the EU should openly admit that in order to get there the EU should do its part in ramming a full withdrawal of Israeli occupation forces and settlement infrastructure down Israel’s throat. Yet there is not a trace of such acknowledgement.

As the Israeli prime minister Benjamin Netanyahu stressed: “I think the Israeli people understand now what I always say: that there cannot be a situation, under any agreement, in which we relinquish security control of the territory west of the River Jordan.”

This is somewhat of a consensus in the Israeli Jewish political milieu. In other words, as far as the Israeli prime minister is concerned, the occupation will continue forever.

Interestingly, the EU is invoking phrases such as the right of the Palestinians to self-determination, and making references to the 1967 borders, more so than before. Yet, at the same time, the EU sings the praises of “the peace process” which has since the early 1990’s set as its point of departure that there will never be a full Israeli withdrawal. But you can not have 1967 borders and advance the right of the Palestinians to self-determination while pursuing “the peace process”. To drive this point home in Brussels will undoubtedly take a number of years of campaigning by the European civil society organizations working on the Palestinian issue.

Based on my experience of dealing with the Finnish foreign ministry, there are a number of officials holding all kinds of posts within the ministry’s bureaucracy who genuinely want to do something constructive on Palestine. There’s mounting frustration on Israeli policies, accompanied by a sense of powerlessness on the part of the EU.

That has always intrigued me. The EU, world’s largest single market, immensely important to Israel (much more important to Israel than Israel is to the EU, needless to say), having a number of tools at its disposal, yet feeling helpless in the face of Israeli actions.

However, unless there is an awakening in the EU regarding both the severity of the plight of the Palestinians and EU’s immense clout vis-à-vis Israel, the situation in Israel-Palestine will only deteriorate. On this issue, the US is a lost cause and will remain a lost cause for many, many years. The intensity of Palestinian resistance in the occupied territories is not at its peak. In short, what we should focus on is the EU and how to bring about a change in EU’s foreign policy towards Israel.