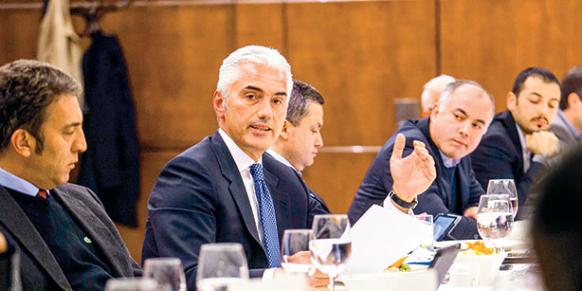 There are signals that the US and EU are looking favorably on including Turkey in a major proposed free trade deal that is being negotiated between the two and the Turkish government, and Turkish NGOs must intensify their lobbying to this end, the president of a top Turkish business association told Today’s Zaman over the weekend.

Turkish Industrialists and Businessmen’s Association (TÜSİAD) President Haluk Dinçer said on Saturday in İstanbul that there are pros and cons to Turkey being a part of the Transatlantic Trade and Investment Partnership (TTIP), adding that Ankara cannot ignore a deal that is slated to be the world’s largest and should learn how to transform the TTIP into an opportunity for the Turkish economy.

Turkey has been pressing for inclusion in the TTIP, a deal that would eliminate tariffs and regulatory barriers that hamper business between the world’s biggest economic blocs. Once complete, the TTIP is expected to represent 85 percent of the world’s economies if combined with free trade agreements with Canada, Mexico and the European Free Trade Association. TÜSİAD has also been lobbying for Turkey’s involvement in the TTIP via its Brussels and Washington offices. Responding to Today’s Zaman’s questions regarding the TTIP negotiation process, Dinçer said talks between the US and EU are going slower than TÜSİAD anticipated, adding that Turkey should focus on how to benefit from the TTIP. Noting that a TÜSİAD team visited Brussels last month to push for an acceleration of talks, Dinçer said a Turkish request to gain observer status in TTIP talks was met with a positive response.

“We are receiving positive signals both from Brussels and Washington that we could find a way to include Turkey in the TTIP. Such other third parties as Norway, Switzerland, North American Free Trade Agreement (NAFTA) and some Asia Pacific countries are also seeking a similar partnership with the TTIP,” Dinçer added. A broad EU-US trade deal is expected to provide a boost in growth and jobs on both sides of the Atlantic. The trade volume in goods and services between the two economic giants — representing almost half of global output — neared 800 billion euros ($950 billion) in 2013.

Risks in TTIP can be averted

Market experts warned earlier that the TTIP would turn into a disadvantage for Turkey since the country lacks the required top-end production infrastructure and favorable tariff regulations. Observers said that while US goods will have no tariff when entering Turkey after the TTIP deal, Turkey will need to negotiate a separate deal with the US to have similar advantages in the US market.

Turkish exports to the US stand at $5 billion, representing only a tiny share of an annual $2.2 trillion in US imports.

“We agree that the TTIP might, in this sense, pose a threat to Turkish economic growth…Turkey has failed to integrate with the US markets at the desired level, however we still believe the deal will turn into an advantage so long as its details are managed well,” Dinçer said. The TÜSİAD head said the TTIP will be one of the top priorities for the association in 2015. Turkey’s customs union deal with the EU will be evaluated along with the TTIP. The EU does not include Turkey in free trade agreements (FTAs) with third countries and Ankara has to negotiate with these countries on its own. Experts say talks for a possible FTA with the US independent of the EU, however, may have their own disadvantages for Turkey, such as the need for new investments since the US will likely require improved manufacturing standards for trade goods.

Dinçer said it is crucial for Turkey to renegotiate the customs union agreement to level the playing field. He said TÜSİAD does not agree with the government’s earlier comments supporting the suspension of Turkey’s European Union Customs Union membership. “Turkey became the first non-EU member country to join the customs union in 1996 and we have benefited a lot from this deal; it can only be redesigned to facilitate trade ties with the EU in a larger scale, as part of the TTIP,” Dinçer commented.

Official data shows that around 40 percent of Turkish exports went to the EU in 2014, totaling $65 billion.

Referencing comments made during an interview with the Hürriyet daily in which the TÜSİAD head said he did not see any “parallel structure” within the state as argued by pro-government circles, Dinçer reiterated that there will be no backpedaling from his earlier statement.

“This statement does represent TÜSİAD and I have received messages of support from our members after this interview was published,” Dinçer stated in response to demands for clarification of what he said in the interview. “There is no need to clarify anything, my association and I stand by with these comments,” he added.

During the High Advisory Council meeting held by TÜSİAD in September, President Recep Tayyip Erdoğan told Dinçer he did not see much support for his efforts “to combat the [so-called] parallel structure” from TÜSİAD.

In response to questions about the president’s remarks, Dinçer said claims about the existence of a “parallel state” are very serious and that TÜSİAD cannot have any role in any struggle against the so-called "parallel structure."

On Saturday, Dinçer reiterated that it is an issue that should be referred to the judiciary. “We do not want to enter into a new argument on this [parallel structure] issue, TÜSİAD is a free NGO and will continue to say what it believes is true. If there really is a parallel structure, the National Intelligence Organization (MİT) and the police are those who should reveal it,” Dinçer added.

Dinçer said the Turkish economy has become even more fragile in the face of external market shockwaves given the fact that the government failed to implement some critical economic reforms on time. “The industrial output and exports are growing weaker while jobless and inflation rates surge. …consumer morale has dropped to its lowest level in five years, we need to address these issues with comprehensive reforms,” he asserted.

The TÜSİAD president also stressed that confidence in the judiciary has dropped remarkably in Turkey and that the government must restore rule of law, which would make it easier to do business in the country.