Public hearings on CPTPP to run nationwide from August 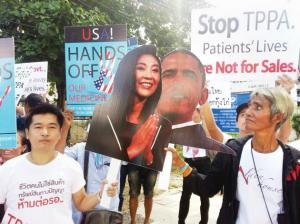 Public hearings will be held in all regions throughout the country from August to September to gather feedback from all stakeholders on the Comprehensive and Progressive Agreement for Trans-Pacific Partnership (CPTPP), a newly formed bloc of 11 Pacific Rim nations excluding the US.

According to Auramon Supthaweethum, director-general of the Trade Negotiations Department, the Commerce Ministry is scheduled to host the first public hearing in Bangkok in August to let stakeholders sound out opinions and concerns about the new trade bloc before the country moves ahead with any decisions on membership. The department will later hold similar public hearings in every region of the country until September.

Deputy Prime Minister Somkid Jatusripitak said over the past couple of weeks that the country planned to submit its application for CPTPP membership later this year. During his trip to Japan last week, Mr Somkid sought support from Japan in becoming a CPTPP member.

Last Wednesday, Japan agreed to Thailand’s request and is willing to support Thailand’s membership in the CPTPP.

On March 8, 11 Pacific Rim countries signed the CPTPP, which was revised after the US withdrew from the previous TPP agreement in January 2017.

The pact is set to go into effect 60 days after at least six countries complete domestic approval procedures. Members are expected to speed up implementation of the pact this year.

According to Mrs Auramon, the department will also hire a research institute to study the benefits and impacts of the new pact on Thailand if the country is to join the CPTPP. Mrs Auramon said the Commerce Ministry will also hold a second meeting of a working group on CPTPP, to be chaired by Commerce Minister Sontirat Sontijirawong some time next month, to consider the comments of 25 government agencies, analysis and all proposals.

"The department expects that joining the CPTPP will benefit more than harm Thailand, as sensitive TPP issues that concerned Thailand, particularly regarding investment and intellectual property, were suspended," Mrs Auramon said.

The CPTPP incorporates the original TPP agreement, pledging to slash tariffs on 95% of trade in goods, along with covering a host of trade topics, ranging from technical barriers to trade and sanitary and phytosanitary measures to competition policy and intellectual property rights.