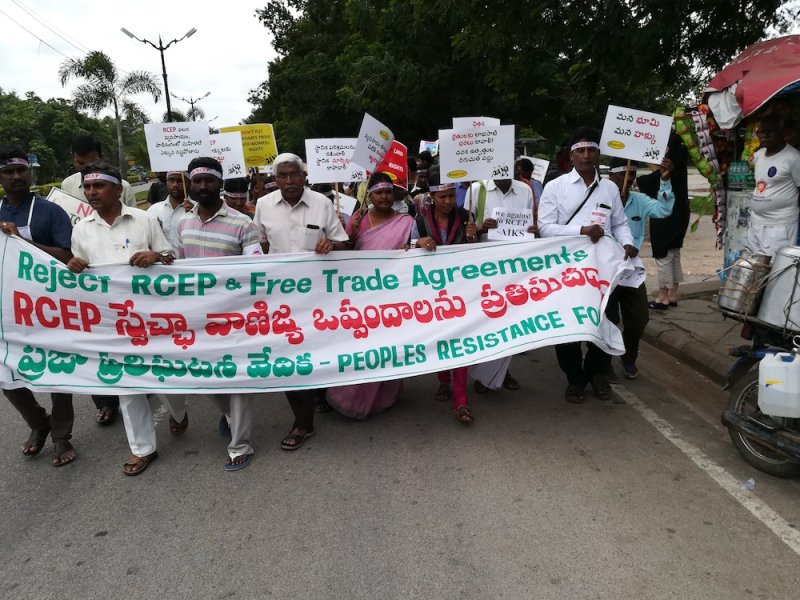 RCEP deal can be disastrous for India

Trade ministers of 16 countries negotiating the Regional Comprehensive Economic Partnership (RCEP) met for their crucial sixth meeting in Singapore in end-August, in an effort to create by far the largest economic integration agreement.

The joint media statement issued at the end of the ministerial meeting provides some key pointers to where the negotiations are headed. The statement mentions that the ministers exchanged views on the next steps toward the conclusion of negotiations and that they adopted a package of deliverables. Although the contents of the package are under wraps, the statement says that the ministers instructed their negotiators to exert utmost efforts to achieve each of the targets in the package by the end of this year. Finally, the ministers reaffirmed their commitment to achieve a “comprehensive, high-quality and mutually beneficial economic partnership agreement”.

Let us try to understand what lies behind the carefully constructed language that the ministers have agreed to put out for public consumption. First, serious pressures are being exerted by some RCEP Participating Countries (RPCs) for an early conclusion of the negotiations. Second, a “comprehensive, high quality” agreement is on the cards, which is a pithy way of describing what is nothing short of a comprehensive economic liberalisation package.

This description fits the narrative that has been coming from RPCs quite well. We have been hearing for quite some time now that the countries behind the RCEP dynamics want tariffs eliminated for all but 8-10 per cent of the traded products. There should be no doubt that market access in goods will be the centrepiece of the RCEP. The emphasis on this issue has a well-founded basis — most economies of the region are export-oriented and, therefore, their economic prospects depend on their ability to exploit the two large markets, China and India.

With the Trump administration walking down the path of trade protectionism, these countries are even more keen to turn more towards their own region for sustaining their trade. Within this equation, India has become a particularly attractive market, not least because its external sector policies are more transparent than those of its northern neighbour.

There is no doubt that RCEP poses two sets of challenges for India. The first is to extract meaningful concessions for enhancing market access in RPCs, which, according to some assessments, should come largely from services. The second is to do a trade deal which will provide the necessary instruments that will ensure the economic viability of small farmers and industries, especially small-scale producers, in the face of relentless import competition.

This implies that a degree of protection to these producers would help the more vulnerable among them. Such a strategy would be critical for the rural producers, for the sudden shock of tariff elimination could completely unhinge them.

If the past few months are any indication, the government has realised that a large number of manufacturing industries as well as agricultural commodity producers are not measuring-up well to import competition, and that their interests have to be protected by enhancing import tariffs.

Accordingly, customs duties have been enhanced, for a range of electrical and non-electrical machines, automobiles and textiles and clothing, all of which form the core of India’s manufacturing base.

This stance of the government is a good pointer to the fact that India needs a tariff regime that must be flexible enough to allow tariffs to be calibrated. Such flexibilities are provided by WTO’s tariff regime, which has allowed the increase in actual applied tariffs on particular products as long as they remain within their WTO bound rates — that is, the maximum tariffs that India is allowed to impose by the WTO.

And, since the bound tariffs are considerably higher than the applied tariffs for most products, India has faced no problems in effecting the recent tariff hikes. Such flexibilities are, however, not allowed in any of the free trade agreements (FTAs), like the RCEP. India’strategy

In the face of this reality, what should be India’s strategy? The most logical would be to negotiate the much-needed space to its real sectors to gain competitive edge. In fact, such a strategy was a necessity a decade back when the then government was negotiating three FTAs, with ASEAN, Japan and Korea.

It was apparent then, as is now, that India’s agriculture and manufacturing sectors are not in a position to run the distance alongside their counterparts from the FTA-partner countries.

But, the commitments were taken nonetheless, and in the years that these agreements have been implemented, India has faced an ever-increasing trade deficit. In 2009-10, when these FTA negotiations had just ended or were in their final stages, India’s trade deficit vis-à-vis its three FTA partners was $16 billion, and in 2017-18, the deficit stood at just over $31 billion.

If India’s trade imbalance with its existing FTA partners looks serious, the corresponding figures for RPCs are worse; because of the China factor. In 2017-18, India’s trade deficit with the RPCs was $104 billion, up from $48 billion at the end of the previous decade. Compare the 2017-18 trade deficit figure for the RPCs with India’s total trade deficit, which was $162 billion; there cannot be a more cogent statement on the inability of Indian producers to compete with their counterparts in the RPCs. Clearly, no logical case can be made for India to overlook these stark numbers and to continue supporting the trade liberalisation ambitions of some RPCs whose sole aim is to increase their presence in a larger market like that of India’s.

One argument that may still be made to remain engaged with RCEP on these excruciating terms is that India should avoid getting isolated at any cost.

That RCEP membership cannot be more important than his country’s critical interests was articulated clearly by Malaysian Prime Minister Mahathir Mohamad: “Malaysia will participate in the Regional Comprehensive Economic Partnership only if the mega trade pact proves beneficial to the nation”.

India’s experience with FTAs and Mahathir Mohamad’s comment have an interesting connect, which is that trade liberalisation via FTAs is not necessarily beneficial for every country. If countries are not able to give their producers the right conditions, engaging in trade liberalisation can seriously hurt. The surge in trade protectionism seems to be conveying this telling message.

The writer is Professor, Centre for Economic Studies and Planning, JNU.