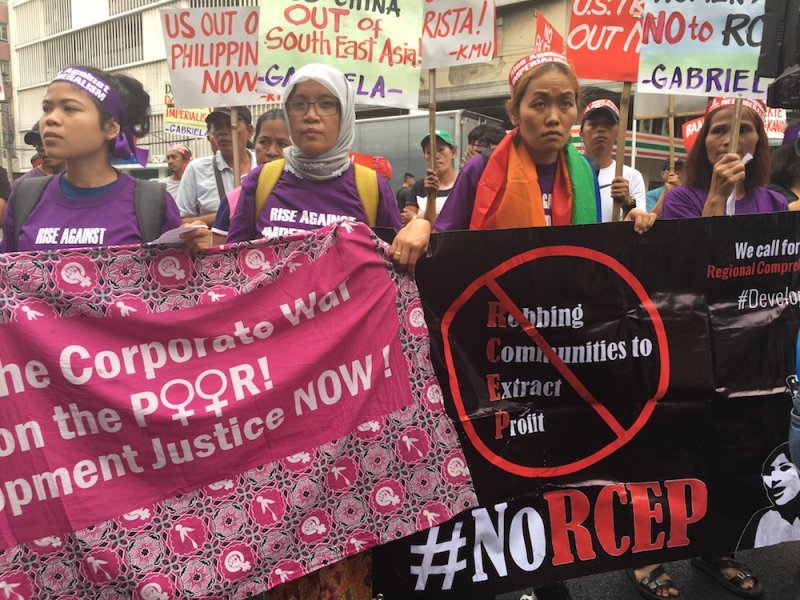 Civil society groups were initially promised more time to express their concerns, however were subsequently told that they had less time. “Is this the value of human rights and peoples’ engagements and participation? Civil societies, media, parliamentarians and even local governments have been hardly given any access to this negotiation, in a process already bereft of transparency,” said Dinda Nuurannisaa Yura, Solidaritas Perempuan, Indonesia. “RCEP impacts more than 50% of the world’s population and is being negotiated without the knowledge of this population. For many governments negotiating this, RCEP might be about cost and benefit, about selling or buying, about letters and numbers. However for women and many other marginalised communities, it is about our life and death.

“Trade liberalisation over the last several decades has seen women’s wages suppressed for corporations’ maximum profits. Health care privatisation or budget cuts in public services have led to women paying more for them or a double burden because they cannot afford to pay for needed health services. All this has led us to a world where just eight men own the same as the world’s bottom half, many of whom are women,” said Joms Salvador, Gabriela National Alliance of Women, Philippines.

While governments acknowledge that these inequalities exist and globalisation has widened the gap between the rich and the poor, both in developing as well as developed countries, they have also expressed their inabilities to reverse it. “If our governments recognise that this current system no longer works, why are we maintaining it?” added Joms Salvador.

The RCEP is also expected to contain an investment provision known as the Investor State Dispute Settlement (ISDS) - one which has fallen under wide criticism both within RCEP countries and globally. “ISDS allows for corporations to sue governments when they attempt to regulate corporations, protect the environment, provide public services, protect public health or introduce affirmative action for women. This is a corporatocracy, not a democracy,” said Pranom Somwong, representative of Protection International Thailand. Businesses also met with the negotiators separately though no information of that business meeting was shared. Past negotiation rounds have seen businesses getting a significant amount of more time than civil societies, sometimes, as much as an entire day.

Misun Woo, Regional Coordinator of Asia Pacific Forum on Women, Law and Development (APWLD), Thailand added, “W(om)E(n) the people as sovereign power must know what this RCEP really stands for - whether it is to facilitate a ‘free’ trade based on people’s rights and needs; or rather it is to maximise corporate interest and power. The current negotiations indicate it’s for the latter as it is done in a complete secrecy behind people’s backs while giving information and decision making access to corporations. We must end this political, corporate hypocrisy. Women have been at the heart of the movements to halt the deadly advances of the WTO. We will use the same solidarity to stop the RCEP and be the power to make decisions over our own lives and future. ”

The women’s groups strongly reject RCEP as it reinforces a destructive development model that the existing free trade agreements and the policies of liberalisation, privatisation and globalisation have inflicted upon the world’s poor and particularly poor women. Women’s groups urge governments to realise a trade agenda based on the principles of international cooperation and solidarity that truly advances Development Justice.

Asia Pacific Forum on Women, Law and Development (APWLD), a leading network of feminist organisations and grassroots activists in Asia Pacific. Our over 230 members represent groups of diverse women from 27 countries in Asia Pacific. Over the past 31 years, APWLD has actively worked towards advancing women’s human rights and Development Justice. We are an independent, non-governmental, non-profit organisation and hold consultative status with the United Nations Economic and Social Council. Facebook: apwld.ngo Twitter: @apwld , Instagram: apwld_