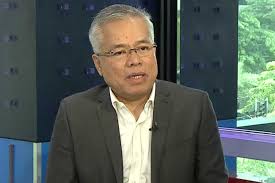 Trade Secretary Ramon M. Lopez has targeted the “substantial” conclusion of the RCEP during the Philippines’s hosting of the Asean meet this year.

RCEP is part of top agenda at the ASEAN Summit

China may have soften its aggression in the disputed South China Sea, but the superpower’s interest in the resource-rich area is seen as one of the top issues that the region’s leaders will tackle at the Asean Summit in Manila this week, an international relations expert said.

Businessmen, on the other hand, expect to see a major breakthrough in the negotiations on the Regional Comprehensive Economic Partnership (RCEP) agreement, plus a possible Asean-wide endorsement of the Asian Infrastructure Investment Bank (AIIB)—both China-led initiatives—showing the irony in the China-Asean relations.

Previous Asean meetings failed to produce a document that sends a strong and united stand on the sea row.

Maria Fe Villamejor-Mendoza, dean of the University of the Philippines National College of Public Administration and Governance, told the BusinessMirror the code of conduct in the South China Sea is one of the agenda the Asean member-nations will most likely put on the table.

Since 2010, China and the Asean states have been trying to reach an agreement on the set of ground rules that would guide the navigation and exploration of resources in the contested waters.

Brunei Darussalam, Indonesia, Malaysia, the Philippines and Vietnam have all asserted claims in the South China Sea, which is not only rich in marine life but also in oil and gas deposits.

It’s either Malacanang is not aware of the agenda that the Philippines will be pushing at the summit or it does not want to telegraph its negotiating position.

On Monday efforts by the BusinessMirror to get a statement from the Palace on what set of agenda the administration has calendared for the Asean Summit that the Philippines is hosting did not result in any intelligent response from President Duterte’s officials.

Communications Secretary Martin C. Andanar said in a text message he is deferring to Presidential Spokesman Ernesto C. Abella regarding the matter. However, as of press time, Abella has not yet replied to the BusinessMirror’s query. His office was also waiting for Andanar’s statement.

RCEP Trade Secretary Ramon M. Lopez has similarly targeted for the “substantial” conclusion of the RCEP during the Philippines’s hosting of the Asean meet this year.

Lopez said last month the 10 Asean members and their six free-trade agreement partners were negotiating on the coverage of tariff lines that will be covered by the RCEP.

Like other free-trade agreements (FTAs), the RCEP will dictate how many tariff lines will be slashed to zero upon the agreement’s entry into force, and how many goods will be scheduled for gradual tariff elimination at a later date.

Late last year during meetings of the RCEP trade ministers, there were some concerns on the commitments on the coverage of goods, services and investments. This was mainly due to the ongoing negotiations between two large consumer markets—China and India.

India’s increasing goods trade deficit with China has proven to be a sticking point in committing for wider entry of products from the China.

The 16 RCEP negotiating countries (Asean nations plus countries they’ve already concluded FTAs with) account for over a quarter of the world’s economy, estimated to be more than $75 trillion. Should the RCEP’s text be concluded this week, it’s likely entry into force would be next year.

There have been no indications on an Asean-wide endorsement of the AIIB, although the financial institution has already indicated interest in funding infrastructure projects in Asean shareholders, such as Thailand and Indonesia.

The AIIB is an international financial institution that aims to support the building of infrastructure in the Asia-Pacific region. It has 57 member-states, has a total capitalization of $100 billion, and was proposed as an initiative by the Chinese government.

In the Philippines the AIIB has pledged to cofinance the bus rapid transit system and a flood-control management project with other multilateral funding institutions.

Villamejor-Mendoza, who coedited the research compilation Building Inclusive Democracies in Asean, noted there might also be a focus discussion on the economic integration of the region.

The Asean Economic Community (AEC) is the bloc’s aspiration toward a single market and production base, a highly competitive region, with equitable economic development and a full integration into the global economy, the Asean investment web site described.

Several agreements have already been signed to realize the fulfillment of AEC, including the Asean Trade in Goods Agreement, the Asean Framework Agreement on Services and the Asean Comprehensive Investment Agreement. These agreements seek to facilitate the movement of goods, services, investments, capital and skilled labor within the region. Aside from this, it also aim to promote trade and investment among member-nations, alongside the expansion of regional production sharing and network.

Villamejor-Mendoza added that the region’s leaders will most probably discuss the issue of piracy in the seas for the protection of maritime services and trade vessels.

Addressing the problem on piracy will suffice the Asean Roro Initiative, which will be launched on Sunday.

The Asean Roro Sea Linkage Route intends to establish an interstate road network between the Asean nations for the easy access to key markets and reduction of transport costs.

The formal meetings of the Asean Summit will begin on Wednesday and will end on Saturday. This year’s summit is themed “Partnering for Change, Engaging the World”.