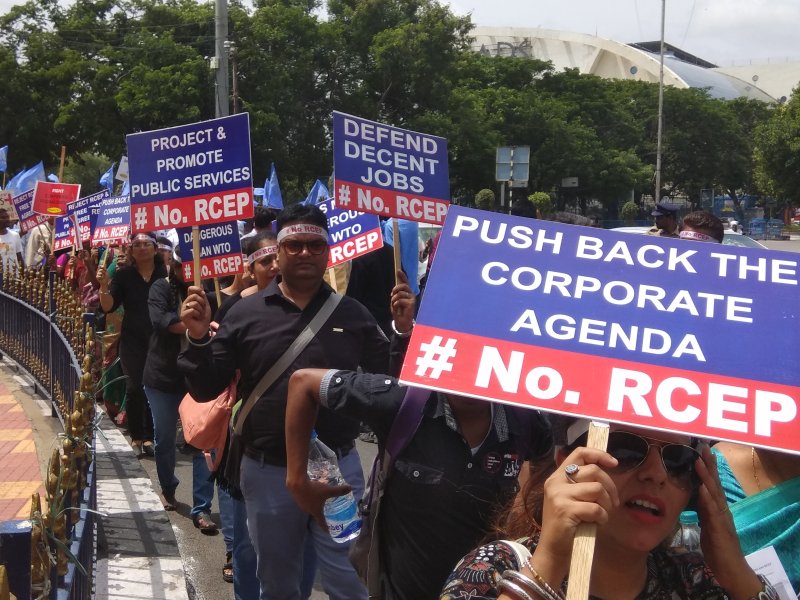 The economic ministers of 16 Asia-Pacific countries have endorsed a set of "clear key elements" that will guide the negotiations to establish a Regional Comprehensive Economic Partnership (RCEP), Philippine Trade Secretary Ramon Lopez said on Monday.

"Essentially we have agreed a set of key elements that will lead to a substantial conclusion by the end of the year," Lopez told a news conference at the end of the 49th ASEAN (Association of Southeast Asian Nations) Economic Ministers Meeting.

The key elements "will be adopted by the negotiating committee as we draw up the details in the contents and provisions of RCEP," said Lopez, who chaired the ASEAN meetings.

For example, he said the elements have given "some indication on recalibrated, more realistic landing zones or objectives which was deemed important if we are really to move forward the discussion on RCEP."

"The more important thing is that whatever the landing zone will be (or) the objectives, it will have to be better than the current individual ASEAN Free Trade Areas (FTAs) or ASEAN Plus 1 FTAs. So, we emphasized on more realistic ambitions," he said.

Lopez said the elements include "more realistic ambitions when it comes to percentage products for inclusion, the phase-in or the timing of each inclusion, will it be in the next 10 years, 15 years."

"So, it’s basically covering the timeframe as well," he said.

"The adopted key elements is a significant stride on RCEP talks, especially when we assess the evolution of how RCEP came about and eventually went beyond ASEAN and the FTAs. The key elements now put more direction and itemize substantial ways that will guide parties to reach substantial conclusion," Lopez said.

Through the key elements, he said, "we can ensure that commitment from each party would have a more concrete impact in the negotiation process, veering away from the plain talks on modalities."

The RCEP ministers met on Sunday to finalize the targets with respect to trade and goods, services and investment under a trade agreement among the 10 members of ASEAN - Brunei, Cambodia, Indonesia, Laos, Malaysia, Myanmar, the Philippines, Singapore, Thailand and Vietnam - and its dialogue partners China, Japan, India, South Korea, Australia and New Zealand.

"The ministers reaffirmed their commitment to further intensify efforts in a cooperative manner for the swift conclusion of the RCEP negotiations in line with the leaders’s mandate," the RCEP ministers said in a joint statement issued at the end of the fifth RCEP ministerial meeting.

The ministers called on all the RCEP participating countries "to focus both efforts and resources to maximize progress towards significant outcomes."

To this end, the ministers welcomed the RCEP key elements for significant outcomes by the end of 2017 as agreed by the RCEP trade negotiating committee (TNC).

They stressed the urgent need to translate political commitments into action, "with wider mandates where necessary."

The ministers also agreed "to make utmost effort to achieve significant outcomes of the RCEP by end of 2017 to bring negotiations closer to its successful conclusion."

The ministers also appreciated the advancing of market access and rules negotiations and reiterated the object of the RCEP for a modern, comprehensive, high-quality and mutually beneficial economic partnership agreement.

"Given the fact that we all come from a different level of developments and also different hierarchies, different concerns and sensitivity, all this will have to be accommodated as we move forward if we come to a swift conclusion," he said.

The conclusion of RCEP will lead to the creation of the world’s largest trade bloc, covering nearly one third of the global economy in 2016, and underscore the potential for the RCEP to serve as an engine for global growth.

RCEP will expand the ASEAN market from 600 million people to 3.5 billion.

RCEP ministers were meeting in Manila as part of the 49th ASEAN Economic Ministers Meeting that began last Thursday.

Launched in November 2012, RCEP targeted to cover trade-in goods and services, investments, economic and technical cooperation, intellectual property rights, competition policy, and dispute settlement, among others. It is seen as a good platform for the region to negotiate with other regional blocks.