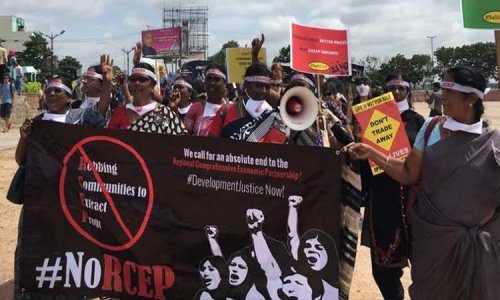 The twenty-third round of the 16-nation Regional Comprehensive Economic Partnership talks over 10 days in Bangkok managed to resolve two more chapters, one on customs procedures and trade facilitation and one on government procurement. This means only four out of twenty chapters have be agreed, but there is still pressure to complete the deal by the end of the year.

On July 20, representatives of nearly 80 civil society organizations, trade unions, peasant organizations, indigenous rights movements and academics from different countries gathered in Bangkok to oppose the provisions in the agreement and the secrecy under which it has been negotiated. The RCEP talks were awarded a ‘FAIL’ for public participation, and fail to fulfil even the ASEAN charter on good governance.

According to the study produced by the Transnational Institute, entitled RCEP a Secret Deal, the Minerals Council of Australia (MCA) and other business groups have had many meetings with negotiators and a strong influence on the RCEP negotiations, while civil society groups have had very limited contact. The study reports that the MCA hired former senior officials in the Department of Foreign Affairs and Trade to “write a guide for Australian trade negotiators”. According to the guide, what RCEP seeks to overcome are ‘non-tariff barriers’, including an elected government’s ability to pursue policies in the national interest, such as promoting local ownerships of mines, taxing foreign mining companies, obliging them “to keep processing and refining operations in country” in order maintain employment, or passing “laws to prevent all the profits from mining leaking out of the country, leaving only social and environmental costs behind.”

Big Pharma acting through Japan and South Korea is threatening access to generic medicines and agri-business corporations are attacking farmers’ access to seeds.

Meanwhile, on July 25, the Peoples Resistance Forum against Free Trade Agreements FTAs (FTAs) and the Regional Comprehensive Economic Partnership (RCEP) held a one-day workshop on ‘RCEP and the Corporate Attack on Public Services’ in Hyderabad, India, the venue of the 19th Round of RCEP trade negotiations. The workshop was co-organised by Public Services International, Transnational Institute, Focus on the Global South, Indonesia for Global Justice, All India National Life Insurance Employees Federation and Indian National Municipal and Local Bodies Federation.

Dr. Amit Sengupta from the Peoples Health Movement (PHM), a global network of public health activists and practitioners, explained the link from the WTO’s General Agreement on Trade in Services (GATS) and the RCEP. ‘While the GATS negotiations have been stuck, we need to understand that FTAs such as the RCEP are now the new avenue for further de-regulating essential services such as health’, he said. ‘But we also need to recognise that international treaties such as the RCEP are part of the problem. The bigger challenge is confronting our own neo-liberal governments who have created a compact with large corporations to undermine public services and workers’ rights. It is these domestic lobbies for liberalisation that are actively pushing processes such as the RCEP, despite the evidence that institutions such as the WTO and FTAs have completely failed the Indian People’, he concluded.

A new report titled Reclaiming Public Services – how cities and citizens are turning back privatisation was launched at the workshop. Despite all the challenges, the report shows that there is progressive change underway in several parts of the world. Thousands of public officials, workers, unions, and social movements are working to create effective public services that address the basic needs of people and respond to social, environmental and climate challenges. They do this most often at the local level. The report is co-published by the Transnational Institute, Public Services International, Multinationals Observatory and Municipal Services Project.

The report found that in 20 cases (10 in water, 3 in energy, 3 in transport and 4 in telecom) when a decision was taken to de-privatise, international arbitration cases were triggered. Another report by the Transnational Institute titled The hidden costs of RCEP and corporate trade deals in India shows that India has already been the target of 20 arbitration cases.