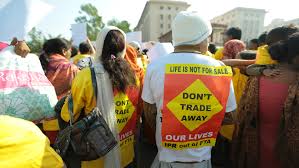 RCEP to commit to signing free trade deal in 2020: source

Leaders from 16 Asia-Pacific nations including Japan, China and India are likely to declare early next week their intent to give up achieving their goal of finalizing a free trade deal by the end of this year, a source close to the matter said Saturday.

But the leaders of the Regional Comprehensive Economic Partnership are expected to commit to signing an agreement on creating the world’s largest free trade area in 2020 in a joint statement to be released after their scheduled summit on Monday in Bangkok, the source said.

Most of the negotiations regarding RCEP have been completed, and the few outstanding bilateral issues will be resolved by February 2020, the source added.

The 16 countries have recently been trying to clinch an agreement by the end of this year. Although they would miss that deadline, optimism has been growing that the mega free trade deal will become a reality sometime soon.

While the RCEP members have concluded text-based negotiations for all 20 chapters, one member nation is withholding agreement on the resolution, the source said. That country is believed to be India, which has apparently yet to agree on key fields including tariffs.

Some diplomatic sources have voiced fears that India could withdraw from the RCEP framework altogether if negotiations do not move forward.

On Friday, a Thai negotiator suggested that RCEP ministers had failed to reach an agreement on the free trade pact at their meeting in Bangkok on the same day, but some were still optimistic about striking a deal before the summit.

A senior Japanese government official told reporters in Bangkok that RCEP leaders will release a "joint statement" after Monday’s summit, although he provided no details.

According to a high-ranking official familiar with Friday’s dialogue in the Thai capital, the ministers made "big progress."

India, meanwhile, has been unwilling to lower its trade barriers, as the nation has suffered massive and chronic trade deficits with China for many years, RCEP sources said.

If the free trade area — which would cover half of the world’s population — is put into practice, trade and investment activities among RCEP countries would intensify on the back of measures like the elimination and reduction of tariffs.

Yet, there is concern in India that the deal would result in an influx of cheap agricultural and industrial products such as smartphones from China, further increasing the trade surplus of the world’s second-biggest economy, the RCEP sources said.

China, however, has been eager to conclude the RCEP as soon as possible, as the country’s economy has been slowing against the backdrop of a tit-for-tat tariff trade war with the United States, the sources said.

RCEP, covering a third of the global economy, has a history of missed deadlines with varying degrees of ambition among the members that include the 10 Association of Southeast Asian Nations. Talks began in 2013 with the initial goal of wrapping them up in 2015.