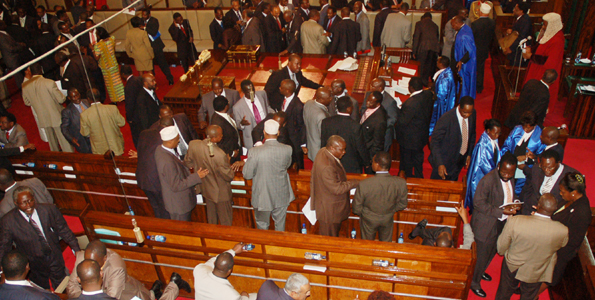 Economic Partnership Agreement will give EU undue advantage over Kenya and other EAC states, they say

Members of the National Assembly last week opposed a push to have Kenya sign a trade treaty with Europe until outstanding issues had been resolved.

The MPs, led by Deputy Speaker Joyce Laboso, called for caution in expediting the trade talks, saying that signing the Economic Partnership Agreement (EPA) in its current form will give the European Union (EU) undue advantage over Kenya and East African Community (EAC) states.

Dr Laboso urged the government to take time to rethink the matter and seek fairer terms before committing Kenya to the deal.

“We are not saying the EPAs are bad, or that the EU is a bad partner. No. We are primarily concerned with avoiding pitfalls that could see Kenya regret its decision to ratify the EPAs in their current form,” she stated.

This comes weeks after Deputy President William Ruto directed trade officials to speedily conclude the pending clauses in order to ensure that the EPAs are signed by next year, implying that the Legislature and the Executive may be reading from two different scripts on the matter.

EAC member states have been negotiating on the EPAs for the past decade. Under the proposed trade deal, the European Commission has asked African, Caribbean and Pacific (ACP) states to open up their markets to EU products in exchange for reciprocal duty and quota free access to its market.

The pacts are expected to replace the current preferential trade deals that the World Trade Organisation had rejected. But several contentious clauses are yet to be resolved. The MPs warn that rushing to sign the EPAs without addressing these concerns could be detrimental to economic development of the region.

Europe has a highly advanced manufacturing sector and also subsidises its agricultural sector heavily. There have been fears that opening up the East African market to Europe could flood the region with cheap European exports, thereby undermining local industries.

“It would spell disaster to our local manufacturing industry if we open up our market to European products. It is almost like being a supermarket from Europe,” said Dr Laboso.

To protect the local agricultural sector, negotiators have compiled a list of sensitive goods that Europe cannot export to the EAC.

The MPs also point out that although the EAC will fully open up its markets, the EU markets would remain beyond the reach of many East African exports due to stringent quality standards that form non-tariff barriers.

Additionally, the European Commission is pushing to have the EAC sign a Most Favoured Nation (MFN) clause. This essentially means that the Community cannot offer any other region more favourable trade terms than it does the EU.

“Under the MFN clause, countries cannot discriminate between their trading partners. This is a major concern to the EAC partner states since they would have to extend favourable treatment to the EU as well as any other major trading countries that the EU signs economic integration agreements with,” said the Institute of Economic Affairs in a February 2013 research note.

The Institute also estimates that Kenya could lose up to Sh12 billion in tax revenues and trade diversion by opening up its markets to duty-free European products.

The EU has set a deadline of January 2016 for Kenya and other developing economies to ratify the EPA. After the deadline, Kenyan exporters would have to pay duty to export goods to the EU market.

Although the EAC is renegotiating the agreement as a bloc, Kenya stands to lose the most should the talks collapse. The other four EAC partner states are classified as Least Developed Countries.

This means that they will continue to have duty and quota free access to the EU market under the ‘Anything But Arms’ principle, whether or not they sign up the EPAs.