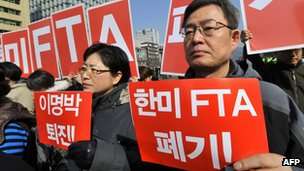 "The South Korea-EU FTA should continue to develop despite Brexit," Finance Minister Yoo Il-ho said. The free trade deal between South Korea and the EU went into effect in 2011.

South Korea’s top economy policy maker made the remarks during the talks with EU commissioner for economic affairs Pierre Moscovici on the sidelines of the Group of 20 finance ministers and central bank governors meeting in the southwestern Chinese city of Chengdu.

Last month, Britons supported the proposal to leave the EU by a small margin. The exit is expected to take at least two years.

Yoo and Moscovici shared the view that South Korea and Slovakia should strengthen economic ties as the eastern European nation wishes to attract further foreign investment.